“In the midst of the ancient Cere that today is called Cerveteri, Mr. Filippo Calabresi digging a ditch at great depth came across a beautiful deposit of aes rude and signatum mentioned above. There were a hundred and sixty-seven pieces of various sizes which all together totaled one hundred and fifty pounds of copper, fortunately saved in time from the furnace. A piece of it appeared of pure copper without a mixture of tin as in Villanova, nor of zinc as in Vicarello, or of lead as in Marzabotto. Among many small pieces there were large ones that guided my study, and I also found a whole one, though a little flawed on the one hand as the metal in the bracket stopped. Still it was clear that it tended to a round shape (see plate II a, b). This helped me as a guide, so that the other fragments were also studied (plate III, 1-5), and I deduced that the metal was placed in a bowl, with a slightly concave bottom, or in a wide bracket in the shape of a cone inverted and with a mobile bottom. This became obvious when I saw how, around the bottom of these loaves, a burr formed which took the form of a base (see the aforementioned plate III).” 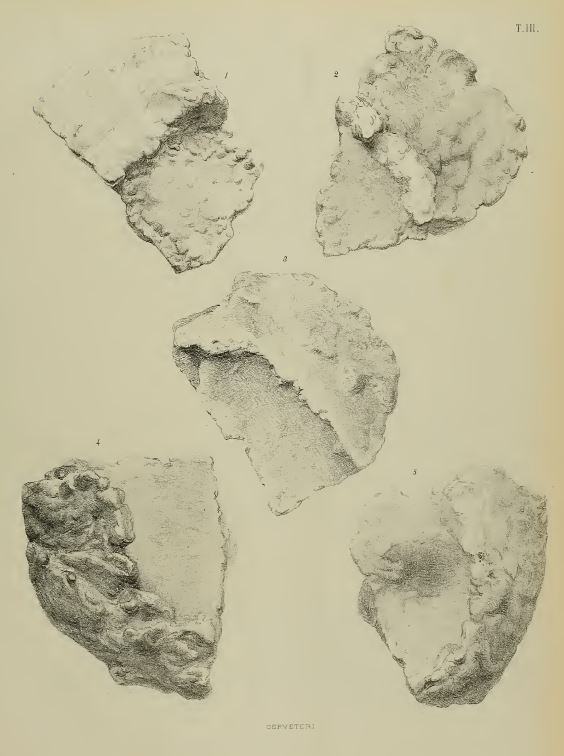 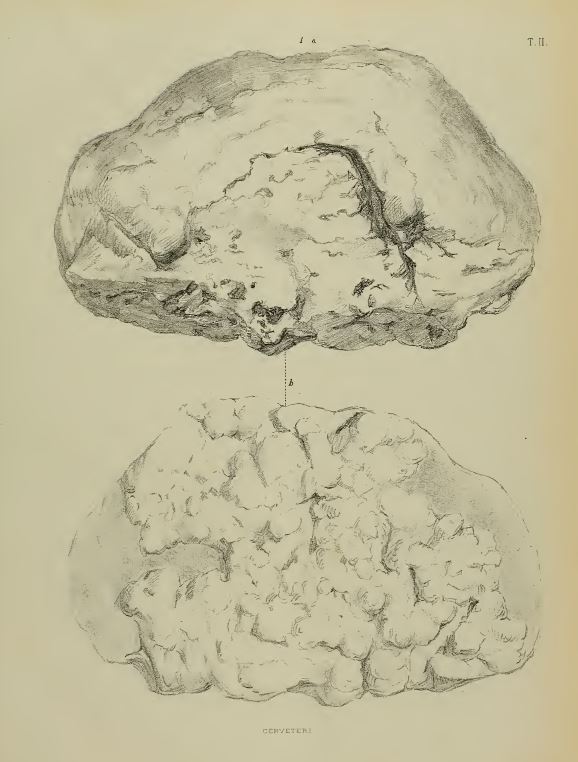 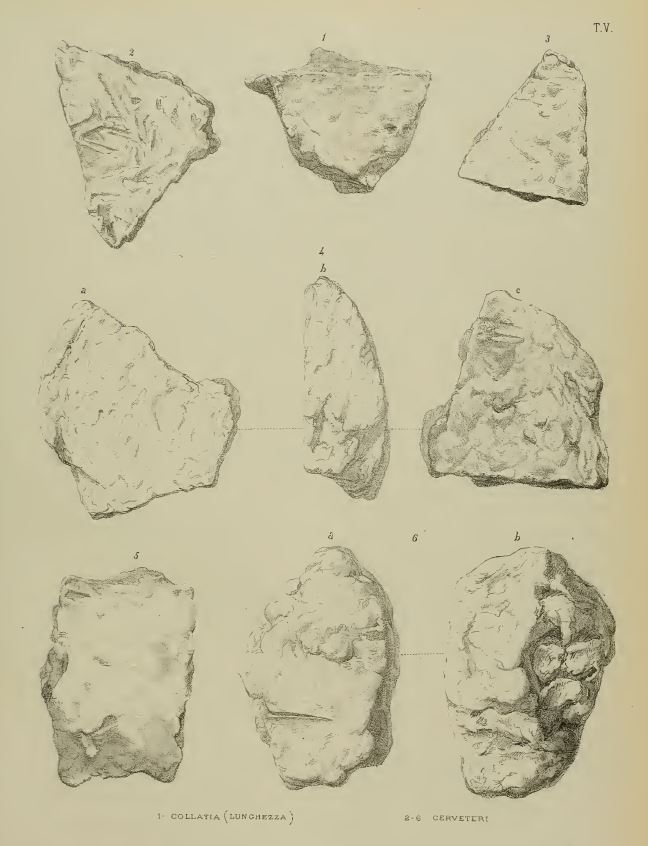 Fragment of RRC 9/1, the elephant and sow bar.

I find this identification hard to believe. 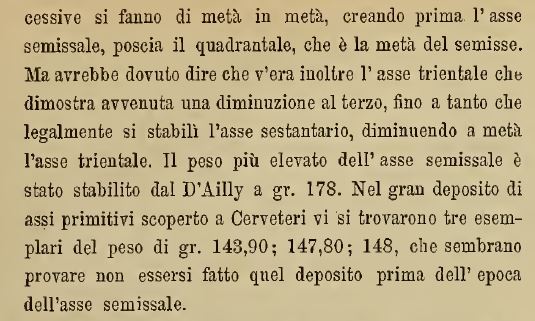 “… In the large deposit of primitive asses discovered at Cerveteri there were found three specimens weighing gr. 143,90; 147.80; 148, which seem to prove this deposit cannot have been made before the time of the semissal [e.g. semilibral] as.”

“Of this as the waters of Vicarello have sent sixteen specimens, and there were four from the Cerveteri hoard, others from the deposits of Monte Mario, others from that of the Ostia. Mommsen states with P. Marchi (H. de la monn. I, 185) that around Ostia a deposit was found only of these “asses” and more abundant than that of Monte Mario (L ‘aes grave 48): and adds that 1109 of this series together with 13 of the Roman series were taken from Vicarello. The truth is that P. Marchi counts only 13 “asses” with the two-faced on the obverse and the head of Mercury covered with winged petasus on the back, which were sent to him, I here and elsewhere I add to his calculations also those pieces then subtracted, which they came in my hand. In the place mentioned we note from Mommsen that in the vicinity of Trent the triens, the quadrans and the uncia of this series was were, per the testimony of Giovanelli (Dei Rezi, p. 81).”

“Three specimens of this bronze were found in the Cerveteri deposit and one was already from the excavations of Tarquinia.”

“… To determine the region, it is worth noting that ten specimens of the as were found in the deposit of Cerveteri and that from Monte Mario hoard they had it with the club and without (Marchi, L’aes grave 46). In my experience, two other specimens but without the club have come from the necropolis of Cerveteri and this same city has now also given five semisses…”

It would seem that Garrucci means 10 asses WITH the club (or with and without the club) were part of the 1852 discovery (CHRR 53), when the semisses were found is not specified and that 2 more asses of the RRC 21 type were found after 1852.