I thought this would be a paragraph of the article I’m working on, but my research has gotten out of control and if I don’t write up my thoughts and references my head just might explode.  If I dump everything here first,  I think I might have a chance of constructing something a little more pithy in the article itself.

So the starting point… Lucilius as quoted by Cicero who in turn claims to be reciting back to Atticus one of his favorite bon mots.

Here’s Shackleton Bailey on the context of the earliest report:

Why do I care?  Well I’m interested in the theme of Rome’s hatred of kings and right now this is about as early as I can push an exact statement.  When can we date this to?  If it really is a Granius saying and he really did say it at the dinner party to Crassus in his tribunate, well then maybe as early as 107 BC (The information on which this supposition comes from Cic. Brut. 43, 160.).   Which on the whole doesn’t strike me as very early at all.

But reading this bit of Lucilius (or Granius or Atticus or Cicero or whomever really said it and whenever they might have said it first),  I couldn’t but help thinking that the joke turns on Tarquin Superbus.  Obvious, right?  Well, I couldn’t find anyone who agrees with me straight off, which is a little odd to my mind.  This seems especially true because of Granius’ reputation for making humor out of ambiguity and incongruity and how this has been commented on by Cicero, as well as by modern scholars:

So I asked myself how I knew it must be a joke about Tarquin.  What can I say about the antiquity of the association of the last king of Rome with arrogance?  Cato talks about arrogance (superbia/superbus) in his speech of the Rhodians (both as something Romans need to avoid and something the Rhodians have), Ennius and Naevius identify it as a Punic characteristic, Plautus mostly associates it with slaves, in the early Ciceronian corpus it is a theme of the Verrines but with no particular reference to kingship.   It is in his consular speeches that he seems to first strongly associate superbia with regal ambitions (de lege agraria) and Tarquin in particular (pro Rabirio Perduellionis Reo) (a rough survey).  There are only 4 extant references to the Tarquins in our surviving Latin corpus that predate Cicero, none refer to the arrogance of Rome’s last king (another survey).

What about Greek sources?  None of the extant references to Tarquin in fragments of Pictor or Posidonius mention arrogance. The earliest reference might be this ([Ps.]Plut. Parallel Stories, 11 = BNJ 286 F12) :

Brutus, unanimously elected consul, drove into exile Tarquin the Proud, who was comporting himself despotically. Tarquin went to the Etruscans and began to wage war against the Romans. But Tarquin’s sons wished to betray their father. But they were detected, and he [Brutus] cut off their heads. So Aristeides the Milesian in his Italian History.

We don’t know Aristeides’ date, maybe 2nd cent BC.  BUT this fragment is really not such as to strike me as likely to be verbatim, but rather a late summary more akin to the epitome/periochae tradition.  The only possible clue is that the Greek word ὑπερήφανον is used not, a transliteration of Superbus as a name as it is often given in Greek historians from the late Republic onwards.

The arrogance of Tarquin or kings in general could be very old at Rome, but so far we have no real evidence to push it much before the very end of the 2nd cent or beginning of the 1st.

Perhaps the most interesting example to arise out my survey has been Catullus Carmen 29 c. 55-54 BCE which associates Caesar with both Romulus and superbia!

Such a negative portrayal of Romulus seems rare, but not that rare:

Some commentators have read this surprisingly ‘straight’  as if only about Granius’ relative social status in Roman banquet culture (so Goldberg, slightly more nuanced is Damon).

I find myself almost relieved to find 19th century scholars who took the phrase just as I did!   It is listed in the 1825 edition of Ennius as fragment 1 of book 4 of the Annales!  This goes back to Merula’s 1595 commentary on the Annales.  He located this ‘fragment’ in book 3.  Of course, the meter of both satire and epic is hexameter.  In this alternate world, Granius become gravius and refers to Brutus’ seriousness as contrasted with Tarquin.

I notice the word superbos is not anywhere in Orsini’s notes regarding the marginalia, however it or another word would have been needed to complete the hexameter.  The marginalia as reported by Orsini does not scan, unless superbos is supplied.

A 1707 commentary has the following: 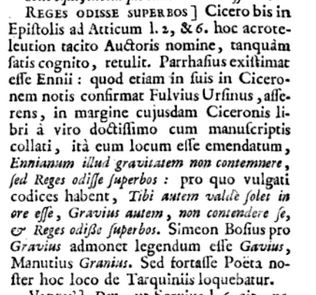 Could Ennius have written:

and then could Granius, Lucilius, Atticus or Cicero have punned on these lines creating a intertext by rewritng it as

Yes.  However it is also clear that the manuscript tradition around this portion of Cicero’s letters is a bit of a mess and will need checking when I’m next at a research library.

That Lucilius has Ennian intertexts is well established (see Elliott, esp. 48-49).  What is more questionable is if we should believe the mysterious hand the wrote the marginalia in the book Ursinus saw.   It is possible it is correct, but is it plausible?!   Slim evidence.

Is the original context in Cicero at all illuminating?  In the longer quotation Cicero is complaining about the arrogance of one of the men whom Brutus recommended to him who wanted to be paid for no work during Cicero’s governorship in Cilicia (ad Att. 6.3.7; Shuckburgh trans.):

So, then, this Gavius, when he saw me at Apamea, as he was starting for Rome, addressed me in a tone I should scarcely have ventured to adopt to Culleolus: “Will you be good enough to tell me,” said he, “where I am to look for the allowances of a praefectus?” I answered more mildly than those present thought I should have done, that it was not my practice to give allowances to those whom I had not actually employed. He went off in a rage. If Brutus can be affected by the talk of such a windbag as this, you may love him all to yourself, you will have no rival in me. But I think he will behave as he ought. However, I wished you to be acquainted with the facts of the case, and I have told Brutus the story with the greatest minuteness. Generally speaking (between ourselves), Brutus has never written me a letter, not even the last one about Appius, in which there was not something haughty and distant. But you often have on your lips: “Then Granius too Thinks highly of himself and loathes proud kings.” However, in that matter he usually stirs my laughter rather than my bile; but he evidently doesn’t sufficiently consider what he is writing, and to whom.

The point of the quotation here seems to be: “don’t we all get a little puffed up ourselves, yet hate the same thing in others?!”

There is nothing to suggest that Granius autem need be part of the original line(s) of poetry.  There is no indication of the source of the quotation.

What of the first partial quotation where Cicero complains of the (so-called first) Triumvirate and reports the feelings of others? (ad Att. 2.8.1; Shuckburgh trans.):

And let me inform you that young Curio has been to call on me. What he said about Publius agreed exactly with your letter. He himself, moreover, wonderfully “holds our proud kings in hate.” He told me that the young men generally were equally incensed, and could not put up with the present state of things. If there is hope in them, we are in a good way. My opinion is that we should leave things to take their course. I am devoting myself to my memoir.

Notice here there is no joke.  The phrase is meant as a serious political sentiment expressed through half a line of verse.

Beyond a doubt it must be a line of famous hexameter, oft repeated as an apt phrase.  Cicero feels no need to tell us the author.  The supposition  that it is from Lucilius rests only on the fact that Lucilius composed a Satire in which Granius was a chief interlocutor.   This seem weak logic to me.  Granius’ sayings were famous in their own right and that he quoted another poet in a witty ambiguous fashion on some occasion in or out of Lucilius’ construction seems even more plausible.

I’m willing then to say that the arrogance of kings was a topic of some Latin dactylic hexameter probably before the beginning of the first century BC–how far before and in what context is uncertain.  It was, however, in the early first century BC. if not slightly before. such a famous topic as to allow for its adoption into learned jokes.

BUT none of these jokes turn on a general Roman loathing of kings or kingship.

I wonder, just wonder, if we don’t here an echo of this famous line here:

We cannot assume that the man in question is actually Cato without other context. 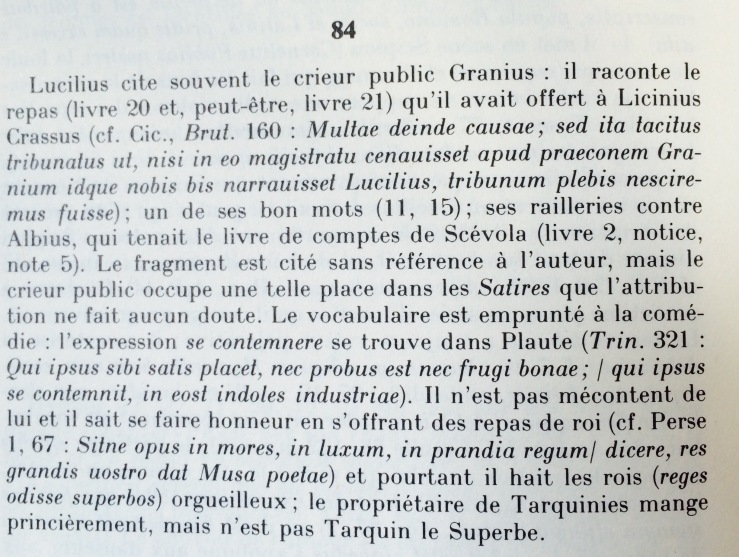