The problem: gladiators don’t fight with whips.   Or if they do I cannot find a textual reference (and I’m pretty good at that). Also, , the man with a whip is clearly dominant and also armed with a sheathed sword.

Crawford is in agreement with Smith 1875. But the Tertullian (de Spec. 21.4) cited by Smith is useless as it just has the gladiators made to fight by attendants with whips, and that is also in Seneca.  Whips are how you control slaves.

The alternate view is that the type depicts a scene of slave suppression (Numismatic Circular 11; Crawford also attributes this ‘fantastic explanation’ to Babelon; so also Grueber in BMCRR).

Lots of these sources make the senior T. Didius (father of cos. 98) a praetor in 138 BCE fighting slaves in Sicily.  And it is true we don’t know who was fighting slaves in Sicily that year and there is gap in our known Praetors that would accommodate Didius, but we’ve got no other testimony beyond this coin it seems (Here I’m following MRR who does not include Didius Sr. in any rank above Tr. Pl.).

I have an itch in the back of my brain that the scene of former enslavers cowing the self-liberating enslaved by laying down arms and picking up the whip.  This is a scene from a Massinger play set in Sicily during the Roman slave revolt.  But I swear that is not where I have it from.  I know my ancient texts better than my early modern dramas…. 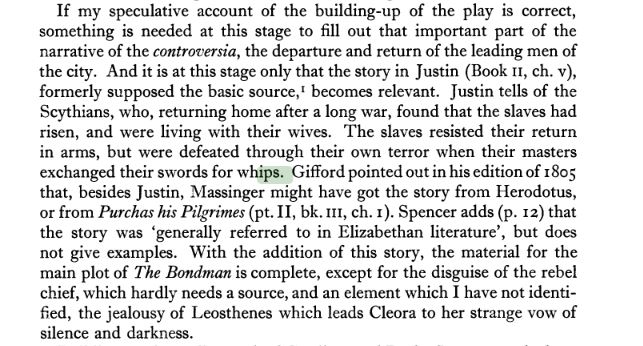 So Crawford is right that it isn’t attested in the Sicilian Slave War but it is an ancient historical trope!  I hate changing my mind but I really can’t see this as a gladiatorial combat scene.

“Men of Scythia, see what we are about! We are fighting our own slaves; they slay us, and we grow fewer; we slay them, and thereafter shall have fewer slaves. Now therefore my counsel is that we drop our spears and bows, and go to meet them each with his horsewhip in hand. As long as they saw us armed, they thought themselves to be our peers and the sons of our peers; let them see us with whips and no weapons of war, and they will perceive that they are our slaves; and taking this to heart they will not abide our attack.”

One thought on “Gladiator?! Really?”