Hasdrubal had secured the war-chest before the battle, and after sending on the elephants in advance and collecting all the fugitives that he could, he directed his march along the Tagus towards the Pyrenees. Scipio took possession of the enemy’s camp, and gave up all the plunder, with the exception of the prisoners, to his troops. On counting the prisoners he found that they amounted to 10,000 infantry and 2000 cavalry. The Spanish prisoners were all released and sent to their homes; the Africans were ordered to be sold by the quaestor. All the Spaniards, those who had previously surrendered and those who had been made prisoners the day before, now crowded round him, and with one accord saluted him as “King.” He ordered silence to be proclaimed, and then told them that the title he valued most was the one his soldiers had given him, the title of “Imperator.” “The name of king,” he said, “so great elsewhere, is insupportable to Roman ears. If a kingly mind is in your eyes the noblest thing in human nature, you may attribute it to me in thought, but you must avoid the use of the word.” Even the barbarians appreciated the greatness of a man who stood so high that he could look down on a title the splendour of which dazzled other men’s eyes. Presents were then distributed amongst the Spanish princes and chieftains, and Scipio invited Indibilis to choose 300 horses out of the large number captured. Whilst the quaestor was putting up the Africans to sale, he found amongst them a remarkably handsome youth, and hearing that he was of royal blood, he sent him to Scipio. Scipio questioned him as to who he was, what country he belonged to, and why at his tender age he was in camp. He told him that he was a Numidian, and his people called him Massiva. Left an orphan by his father, he had been brought up by his maternal grandfather Gala, king of the Numidians. His uncle Masinissa had come with his cavalry to assist the Carthaginians, and he had accompanied him into Spain. Masinissa had always forbidden him to take part in the fighting because he was so young, but that day he had, unknown to his uncle, secured arms and a horse and gone into action, but his horse fell and threw him, and so he had been made prisoner. Scipio ordered the Numidian to be kept under guard, and when he had transacted all the necessary business he left the tribunal and resumed to his tent. Here he sent for his prisoner and asked him whether he would like to return to Masinissa. The boy replied amid tears of joy that he should only be too glad to do so. Scipio then presented him with a gold ring, a tunic with a wide purple border, a Spanish cloak with a gold clasp, and a beautifully caparisoned horse. He then ordered an escort of cavalry to accompany him as far as he wanted to go, and dismissed him. Livy 27.19

This portion of Livy corresponds to Polybius 10.40.  There are a number of differences and I’ve been writing a little elsewhere about how they both treat Scipio’s response to being hailed as King.  Here I’m worrying about this portion:

On first reading my impression was that Livy was concerned to make clear two different standards of treatment one for the Spanish and one for the Africans.  The former being granted clemency, the latter the horror of slavery.  If this was the actual historical event, there might be practical reasons for the distinction.  The local population could be  expected to return to their homes and show appropriate gratitude for this beneficence, while those whose homes were across the sea would likely remain a logistical nuance if freed.   Also it might be tactically a way to divide the loyalties of those in the Carthaginian army by creating distinct outcomes for different populations.  There need not be a racial distinction inherent in this act or its narration.   It’s primary historiographical function is to set up the narration of Scipio’s interaction with Massiva.  Among the African slaves one stands out. He’s over royal blood.  Notice the thematic connection with Scipio’s own rejection of royal honors.  Livy interrupts himself to give a direct commentary saying Scipio is to be admired all the more for  rejecting “a title the splendour of which dazzled other men’s eyes” (miraculo…stuperent).  Now Massiva is recognized because his very bears witness to his royal origins (forma insigni cum audisset regii generis esse). He’s disobeyed his elders and acted wrecklessly by joining battle.  This royal youth shows none of the regalem animum of Scipio himself even though he has the look and lineage.  Recall how Scipio was too young for the command when he was sent out to Spain and the emphasis placed on his obedience to Rome.  Scipio shows this royal youth Roman clemency, restores him with many gifts to his family.  Notably among the gifts is a horse to replace the one that the youth lost, one he had stolen and then was got killed, leading to his own capture.

Massiva and the African prisoners are one hundred percent absent from Polybius.  Did Livy make this up out of sail cloth?!  Perhaps not.  Scipio Africanus is often the subject of anecdotes.  This may have been a well worn traditional story (the prince found among the paupers, diamond in the rough…) and may have been long attached to Scipio.  Livy’s artistry is fixing it here in the narrative in contrast to the Scipio’s acclamation and rejection of kingship.  Romans aren’t kings, they make kings.

Even if Livy isn’t playing with race in this episode, the later reception of this story certainly reflect European preoccupations with Race, especially its depiction in paintings… 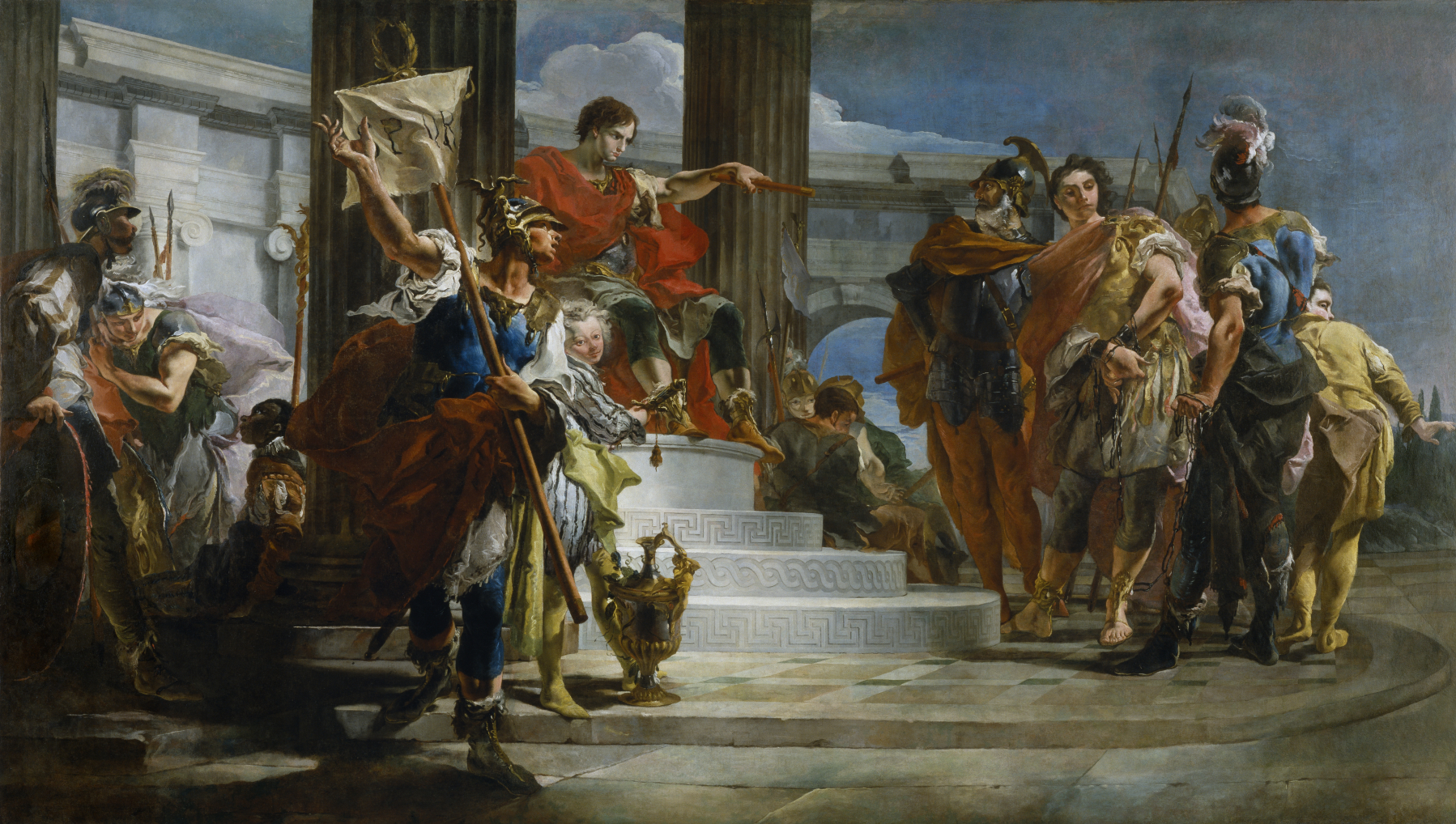