So just finished reading this article.  It is very important revisiting of ideas and evidence explored in Martiz 2001.   Kopij is the best lay out of all the evidence.  I do how ever read the development of the semantic range of meaning a little differently.  I would want a both/and style interpretation.  Symbols are best when they’re meanings are layered.  The elephant scalp can evoke any, some, or all of these connotations AND the connotations bleed into one another.

I certainly agree that Numidian and Maurentanian usage of the elephant scalp is drawing on Roman usage/expectation, but it is not completely without reference to Egypt = Africa and Hellenistic Kingship/Ptolemaic associations!  Consider the reverse of this coin of Bogud (successor of Bocchus I, father of Bocchus II): 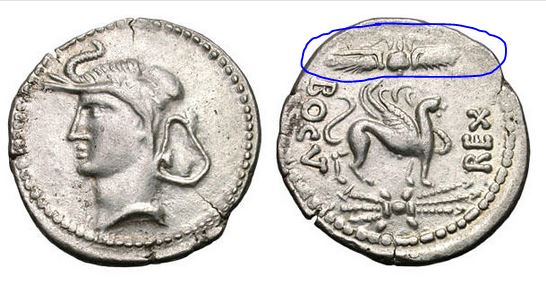 I’m 99.5% certain RRC 402 is a female personification.  The earring on the BM specimen is my main gender indicator (circled in blue).  One of the oddest part of Pompey’s coin feels to be the placement of the ear of the Elephant very very different than any other representation as far as I can tell.

I like how Kopij puts the legend comparisons with RRC 446 and 447 front and center.  This isn’t a comparison I’ve really dwelt on and it seems key.  Also the gold = crisis point is well taken.

Issues I want to think more about and were not really discussed in the article are the imitation of Marian and Sullan triumphal imagery (RRC 326/1; RRC 367/4&5).  The trace rider and the shape of the car seem closer to Marian prototypes.  The Victory and the gold material closer to Sullan imagery.   The obverse head is small compared to the flan like the Sullan precedent.   I wish I could be sure what the triumphator was holding in the case of the Pompey and Marius types.  On the Sullan type its a caduceus and was made BEFORE Sulla got to Rome.   The laurel wreath border is odd and has its best parallels (to my mind) in the late 80s BCE (RRC 358/1; 376/1; 374/2; 361/1).

Stylistically I think it fits best in the 70s… but I give that assessment a low confidence rating.