So, like many of the authors of contemporary sale catalogue entries, I think this claim by Crawford contra Bahrfeldt cannot be support:

Why?  Well first, just the way the object over the anvil looks.

Actually reverse dies were smaller and there is no reason to put a wreath on one or to make it so much bigger proportionally to  the other symbolic objects in the field (other specimens of RRC 464/2).  It looks like a pileus and the wreathed pileus and tongs are the attributes of Vulcan, not just on republican coinage, but more generally in classical numismatic imagery. 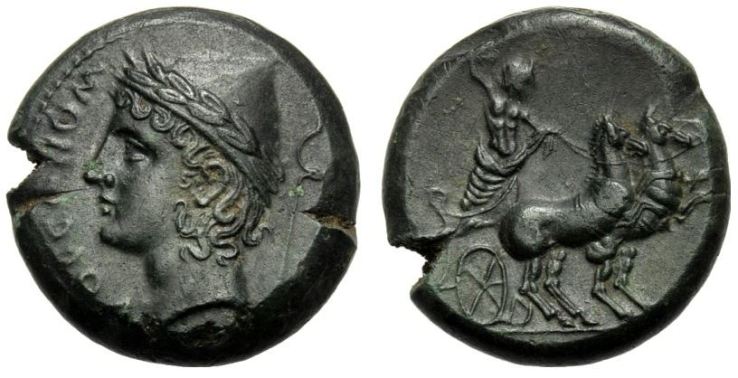 For more specimens like this see the ANS collection.  (Although I think it a little perverse they catalogue the obverse as Hephaestus, when the die engraver actually labelled it VOLCANOM.)

But Crawford has a point that Carisius’ series all has thematic connections between obverse and reverse and so the two should have some logical connection.

Roma/Symbols of Imperium – Power, the prosperity that comes from ruling land and sea, global dominion…

Victory/Roma seated on a pile of arms – ditto

So what do Juno and Vulcan have in common?  In Greek myth they are mother and son.  Did this hold in the Roman tradition?  We don’t have much evidence, just a single word in  Ovid’s Metamorphoses, book 4:

Is this what Carisius has in mind?  Maybe.  Or more likely the Greek tradition made more comfortable the celebration of the forge under Juno Moneta’s guardianship, i.e. the Roman mint. The imagery on coins was not baunastic, but rather sacred, civic, and pious.  Any forge on a Roman coin would be under the protection of the divine, namely Vulcan the smith god.  Notice how the cap hovers above the instruments.