Linneaus that great classifier of living things called this woodpecker Picus Martius, the Black Woodpecker as it’s generally known.   Its modern scientific name is Dryocopus Martius, picus now being used for another genus of the woodpecker family.

But for the classicist the Picus Martius is an important bird.  Ovid puts Mars’ bird, the woodpecker, as a defender of Romulus and Remus on par with the wolf.  (You’ll notice a theme running over the last few posts…)  Pliny has lots of fabulous anecdotes about the bird and its importance in auguries and how it will defend certain flowers or how its beak can be worn as a charm against wasps.  Among other things at NH 11.123 it is described as having a tufted head.

Not – to be sure – an uncommon trait for woodpeckers and one can see why Linneaus thought the Black Woodpecker a good candidate for Mars’ totemic bird.  I’m sure I’m not the first to deduce this, but I think this is the more likely candidate: 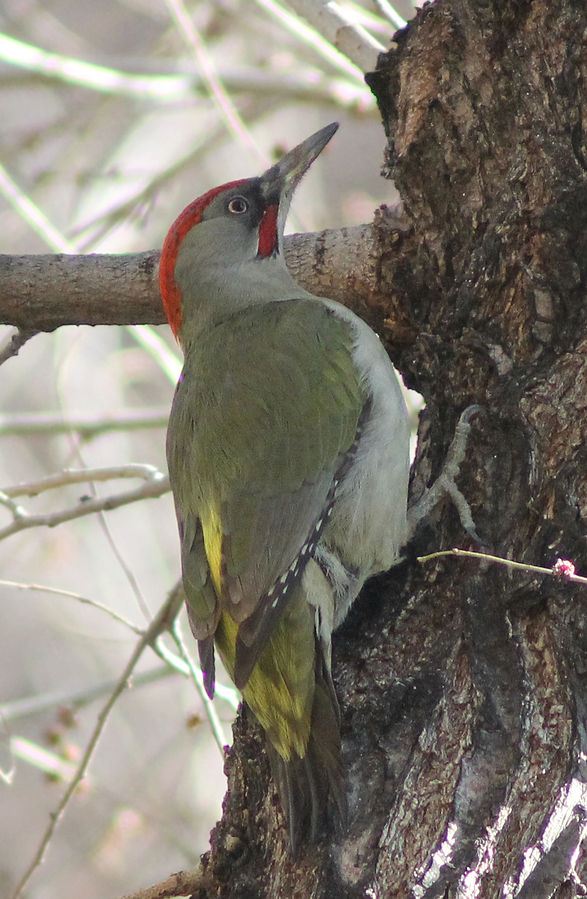 Today, this beauty is the Picus Viridis or European Green Woodpecker.  The first reason I came to this conclusion was largely based on typical range of the two birds.  The Black is rarely spotted below the Appenines today, where as the Green is known throughout the Italic Peninsula.  Then there is this bit of Virgil:

There Picus, the Horse-Tamer, sat, holding the lituus, the augur’s

Quirinal staff, and clothed in the trabea, the purple-striped toga,

and carrying the ancile, the sacred shield, in his left hand,

he, whom his lover, Circe, captivated by desire, struck

with her golden rod: changed him with magic drugs

to a woodpecker, and speckled (sparsit) his wings with colour.

Of course how do we know that this Picus is Martius Picus?  Well this seems likely from Servius’ commentary: