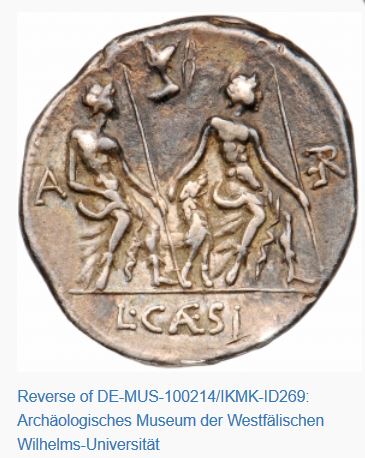 The reverse of this coin (RRC 298/1) represents the Lares Praestites based on the description of their cult image in Ovid (see also Plutarch).  Earlier in Ovid’s same work he gives a pretty horrible account of their conception.  Lara or Lala warns Juturna of Jupiter’s amorous advances and is punished by having her tongue ripped out and then, while be lead to the underworld, she is raped by Mercury and conceives divine twins.  Wiseman and Coarelli have connected this narrative with a famous mid-forth century mirror: 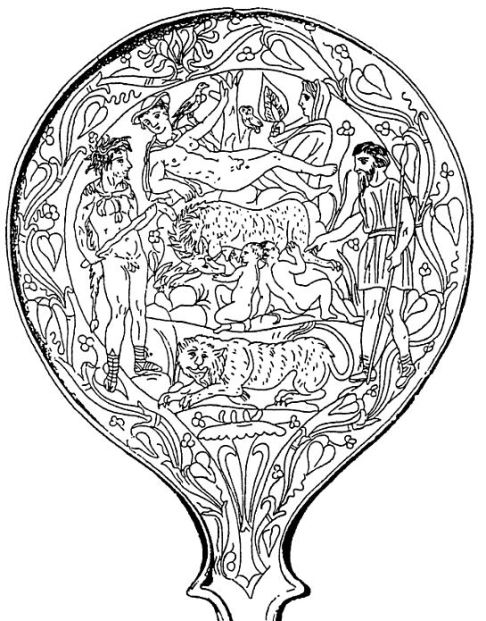 And so is pretty much everyone else in the world.  But Coarelli has a fairly interesting point about borrowing of the iconography of one myth to create a new one.  That sort of shift isn’t instantaneous.   So if the Lares Praestites were originally the twins beneath the wolf, when would  audiences have stopped seeing them as such?  Could the didrachm be ‘misread’?  Could the coin up top from 112-11 BC be taken to depict Rome’s founders?  Ovid’s poem suggests their cult was neglected in his day, but this moneyer certainly thought they were worthy of commemoration. Farney sees the representation as a claim to divine ancestry explaining the little head of Vulcan as an allusion to the paternity of Caeculus, the founder of Praeneste. Caeculus’ uncles could be understood to be these Lares.  But, Lott wants to see the Vulcan image to mean that these Lares protect the city from fire…