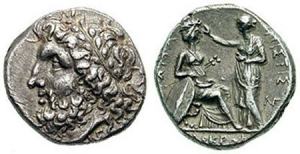 Being rather demoralized by the stalling of the edits and then further derailed by a networking lunch (a most pleasurable experience with much inspiration about future study abroad, err… ‘international education’ as one says today), I couldn’t really think about coins, but didn’t want to break my promise to put a coin from the book here every day.  So I looked in my coin file and this one popped to the surface.  It looked familiar so I did a key word search and sure enough just over a year ago I talked about it at a nice invited lecture at Leeds University.  I said: “Near, or at the end of, the war with Pyrrhus, the Locrians, a community in the very toe of Italy, created a coin which has the very earliest depiction of the personification of Roma on it.  She bears a scepter, rest her right arm on a shield, and sits upon a curule chair.  She is being crowned by the personification of Pistis, the Greek equivalent of fides.   Both figures are labeled with legends so the audience cannot mistake the unusual scene.  Even this type of labeling on coins is virtually unknown at this date.  Legends usually named whose coin it was ‘the coin of King Philip’ or the ‘the coin of the Athenians’.  Our literary sources on the Pyrrhic War are spotty but according to the epitomes of Cassius Dio, the Locrians changed sides a few times and suffered the consequences of those choices—a pattern of events that repeated itself in Hannibalic War.  I take this ‘celebration’ of Roman good faith as an expression of a rather desperate hope that they might benefit from this particular Roman virtue.” I then connected it with a few literary texts.  Anyway.  It’s something.  Back to the damn edits.

1 thought on “Can one plagiarize oneself?”