This is an idea that grew out of my last post which spiraled into tessera hospitalis, tokens of friendship.  It makes good sense that we have ones in the shape of joined hands.  The dextrarum iunctio was a common symbol of concordia and fides.  But what is up with all the half animals?  I think that it is likely to represent the animal sacrificed in the creation of the union.  I would also hypothesize that pigs are popular in this private domestic context for the same reason that we see pigs being used to seal a foedus.

Allow me to remind you of some famous numismatic pigs: 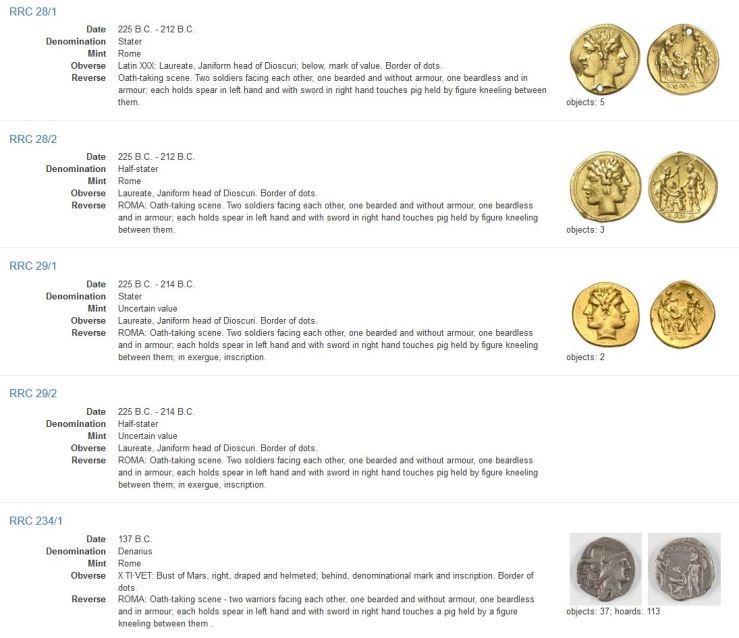 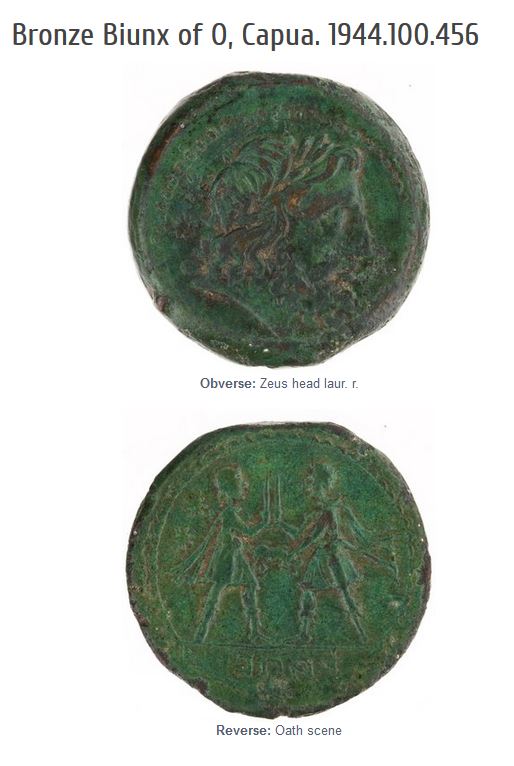 The coin above is just there as a reminder that boars do appear on early Roman coinage in other contexts.  The main point of this post is put up this curious theory about the elephant and pig currency bar (RRC 9/1):

My earlier post about military standards is here.  I don’t really believe the rest of Maria Beatriz Borba Florenzano’s framing of the issue in terms of Roman religious thinking and this rationalizing view doesn’t account for the other folkloric accounts of elephants and pigs, but it is still an intriguing thought…  And who doesn’t love a bit of Ennius now and again.  Unfortunately for her argument and for our own hope of some answer to the pig problem, Skutsch pretty much tore apart Nenci’s reading of this line in his BICS 1977 article.

I would just note in comparing the boar above to our friend the sow below, that both are represented with an impressive line of bristles down their backs.  I do think, however, the two engravers have carved the animals in such away as to plainly distinguish their genders. And, I have my doubts that the legions would use the female, instead of the male, as their totemic creature… 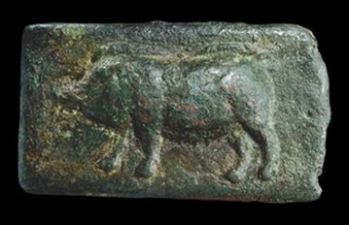 There comes a day in every young numismatist’s life when he or she asks the question is the pig story true?   Did the anyone, let alone the Romans, ever use pigs in battle against elephants?  Would it work?   And if it worked wouldn’t everyone have used it?  Fighting elephants was certainly the opposite of fun.

First off, let’s throw out the idea of Roman flaming pigs (regardless of what the video games offer you as options).  That is bad scholarship at least when it comes to the Roman account.  Here’s some of that bad scholarship (p. 87ff) and another one (p. 202). Don’t believe everything you read it books, even books with footnotes.  Lamentably, or admirably, Wikipedia is actually far better at reviewing the sources, than apparently some university presses.  Here’s the War Pig entry.

So why do numismatists think that pigs and elephants should date the above currency bar to the Pyrrhic War? Because of these two sentences in Aelian (on the nature of animals, 1.38):

The elephant fears the horned ram and the grunting of a pig. Thus, the Romans are said to have routed the elephants of Pyrrhus, king of the Epirotes and brought about brilliant victory for themselves.

I put up the Latin as that’s more readily available online for those who want to check out context. My translation is based on the Greek (not that it makes a huge difference).

This is not great historical evidence. And everyone gets so hung up on the pigs that they ignore the mention of rams completely. Aelian followed Pliny and other writers for most of his little anecdotes.  Pliny has squealing pigs and elephants, but no Pyrrhus. Let’s put this in context: Pliny is also our earliest source for elephants being afraid of mice.  And common on, did you really need a Mythbusters episode to debunk that?

The whole thing sounds like some marvelous tale.  And in fact it’s found in the some of the Alexander Romances: 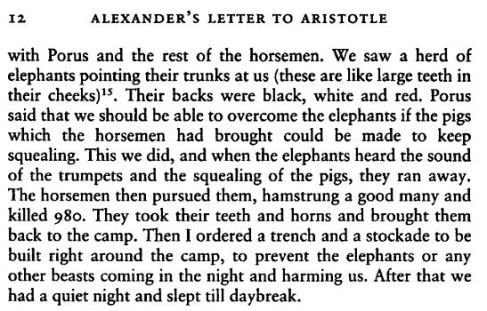 The ‘secret’ of the elephant’s fear of a pig is attributed to Porus, the Indian King.

There is a better attested version of the elephant and pig story in Hellenistic history, but no Romans in sight.  Again, our sources are late and known for being magpies of wonderful tales:

At the siege of Megara, Antigonus brought his elephants into the attack; but the Megarians daubed some swine with pitch, set fire to it, and let them loose among the elephants. The pigs grunted and shrieked under the torture of the fire, and sprang forwards as hard as they could among the elephants, who broke their ranks in confusion and fright, and ran off in different directions. From this time onwards, Antigonus ordered the Indians, when they trained up their elephants, to bring up swine among them; so that the elephants might thus become accustomed to the sight of them, and to their noise.

If it weren’t for the currency bar I’d throw the whole story out.  Dionysius offers some perfectly plausible accounts of the Roman tactics against elephants in the Pyrrhic War:

Outside the line they stationed the light-armed troops and the waggons, three hundred in number, which they had got ready for the battle against the elephants. These waggons had upright beams on which were mounted movable traverse poles that could be swung round as quick as thought in any direction one might wish, and on the ends of the poles there were either tridents or swordlike spikes or scythes all of iron; or again they had cranes that hurled down heavy grappling-irons. 7 Many of the poles had attached to them and projecting in front of the waggons fire-bearing grapnels wrapped in tow that had been liberally daubed with pitch, which men standing on the waggons were to set afire as soon as they came near the elephants and then rain blows with them upon the trunks and faces of the beasts. Furthermore, standing on the waggons, which were four-wheeled, were many also of the light-armed troops — bowmen, hurlers of stones and slingers who threw iron caltrops; and on the ground beside the waggons there were still more men.

When Pyrrhus and those with him had ascended along with the elephants, and the Romans became aware of it, they wounded an elephant cub, which caused great confusion and flight among the Greeks. The Romans killed two elephants, and hemming eight others in a place that had no outlet, took them alive when the Indian mahouts surrendered them; and they wrought great slaughter among the soldiers.

Elephants left a big impression on the Roman mind.  Of this there is no doubt.  But if pigs worked so well why not use it as a tactic elsewhere?

I find myself asking myself about the provenance of the BM specimen (acquired 1867 from the Sambon Collection).  Are there other specimens of this type of currency bar?  Are there more of them? Any with a decent archaeological provenance?  Is it all just to good to be true?