There seems to me to be some logical inconsistency in how we identify Pan and Silenus on Roman Republican coins.  The type above is likely the first to depict either.  Crawford dates it to 91; Mattingly prefers 90 (2004: 248).  Quite logically the “Silenus” on the obverse is taken to pun on the moneyer’s name, D. Silanus.  The following year (according to both Crawford and Mattingly), C. Vibius Pansa strikes a coin that looks like this:

These coins might almost be called vanity pieces.  There were probably less than 10 dies created for the manufacture for these types, but his other coins with Apollo and Minerva in a Quadriga (RRC 342/4-5) used upwards of a 1000 dies.  Crawford assumes another name pun and identifies the head with pointy ears as Pan and the head with the ivy wreath as Silenus and sees them both as masks.  Notice the heads have no necks.  I find this problematic as Silanus’ Silenus and Pansa’s Pan have nearly identical iconography.  If we look beyond the coins to for comparative iconography it become clear that Pan and Silenus have a pretty distinctive iconography.  Pans are part goat and usually have more animalistic bodies, especially their lower halves.  Their heads are marked out by two goat horns rising from their forehead.  Silenoi or Papasilenus is an old satyr, pug-nosed, covered in a white flocked suit on stage, and horse ears like any satyr.  [Note: the ears are pretty much the only difference between a Silenus depiction and that of Socrates.]  Here is a perfect side by side:

Of course, rigid rules need not apply.  Perhaps the same image can represent both Silenus and Pan.  Compare for instance these coins of Panticapaeum:

The head on the coins of this city is often identified in catalogs as Silenus but because of the name of the community a visual pun is often assumed.

I am less convinced that a case can be made for the ivy crowded figure to be a Silenus.  The face is just too smooth, the nose to straight.  This seems very much like a head of Dionysus.  The hair style is the same as that found on the Thasian type used by the Romans in Macedonia:

Compare the hair roll over the forehead, the loop down in front of the ears, and the prominent back knot.  The two locks of hair hanging down have been slightly modified on the Roman type.  The front is left curly the back has been modified into a straight fillet, perhaps to emphasize the mask like qualities.  Notice that the two bunches of ivy berries at the top of the head and the ivy leaves below.  The typical five on the Thracian type have become just three but with lobes and berries.

Pansa’s silver types was echoed on a few of the bronzes of his fellow moneyer Q. Titius:

Q. Titius depicts a beardless Liber on his denarii with a very similar hair style:

These are the first representations of Liber (Roman Dionysus) on the silver coinage.  His first appearance at all was on an especially created denomination of the silver the bes or 2/3s coin = 8 unciae.

Even on this rare worn specimen the hair style can be made out.

The adoptive son of the Pansa just mentioned echoed elements of his father’s series in 48 BC (RRC 449).

I’ve put up this small selection just to note the later rendering of Dionysus and the Pan/Silenus mask.  On the series of 90/89BC (RRC 342), Ceres had been paired with Apollo who is now missing from the later series, replace with a youthful Dionysus. 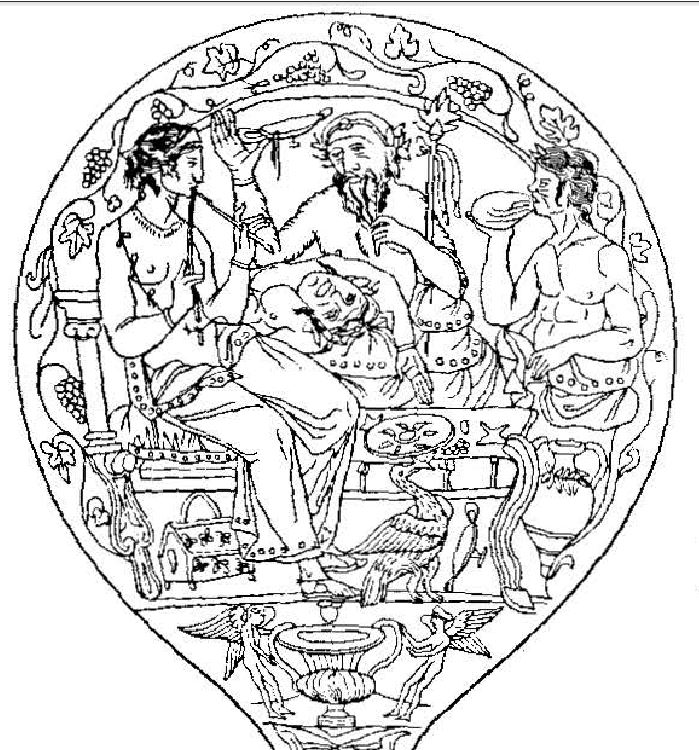 Also note regarding the name pun on Silanus’s coin the first illustated above, inWiseman 2000: 270 with fig. 6 & 7 that younger satyrs with no beard or a short beard are labeled SILANOS and SILANVS.