It’s debatable whether the Flamininus Stater we’ve talked so much about already was made by Greeks to honor him or by Flamininus himself to pay his troops.  As usual, I’m inclined to favor Callatay’s views and thus go with the later based on the reasoning that the number of dies suggests a sizable issue and thus some practical function.  That would make that the first living Roman on a coin, but the issue is clearly not the work of the standard Roman mint.  So when did it become okay for the mint to put a living Roman on a coin, let alone for an individual to put himself on a coin?!  Caesar? Brutus?  Nope. Probably these guys: 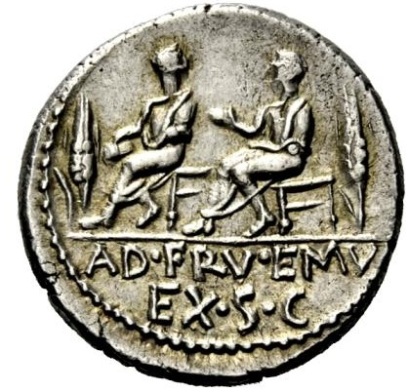 We can’t exactly call it portraiture, but it certainly shows the two men conducting their business as quaestors responsible for Rome’s grain supply.  As the coin itself tells us they were instructed by the Senate to create this extraordinary issue to fund their important work.  They took that opportunity not only to put their names on the obverse, but also to depict themselves fulfilling their duties.

A far more radical choice of imagery than this near contemporary issue:

From Babylon onwards its been suggested that that is Marius in the triumphal chariot with his son on the trace horse.  This has led to a dating of the coin to 101 BC.  The year before the issue above.  Mattingly (1998; reprinted 2004) has used hoard evidence to down date the Fundanius issue to 97 BC.  I accept his dating, but still think that the triumphator is intended to be Marius.   Fundanius’ celebration of the victor of the Cimbric and Teutonic Wars seems very tame and appropriate in light of the choices of Caepio and Piso.