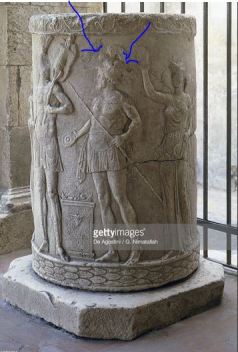 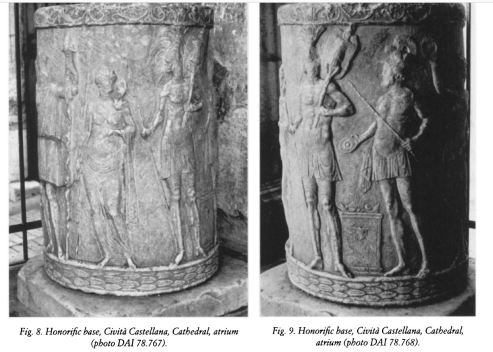 The soldier sculpted on the base represents a mythological personage: the face of the sacrifant is idealized, his beard is unusual for this period, and although armed, he is shown barefoot. In this case the figure probably represents Romulus rather than Aeneas, for the patron deity of the latter, Venus, is secondary to Mars, whose towering figure dominates the composition. He probably derives from a freestanding Roman prototype adapted to relief. The original sculpture was evidently a late Classical Greek type laden with specifically Italic attributes: he wears an anatomical cuirass without lappets (pteryges), and his winged helmet is of an Italic type. It crops up in southern Italian vases on a metope fragment of Sullan date from Orvinio in Sabina, and was used, significantly, for some images of Roma on Republican coins.