I’m usually a Derow-vian on all matters Polybius.  So, true to my roots, I don’t talk about a mixed constitution, but a balanced one.    I read his anacyclosis as an unstoppable force with the Roman constitution only being a modified democracy of sorts that has fended off ochlocracy (mob-rule) and demagogury thus far.  I believe the final chapters of Book 6 are written to an eye to the tribunician  politics of the post 146 BC period.

The key passage is as follows:

6.57.7-9: and for this change the populace will be responsible when on the one hand they think they have a grievance against certain people who have shown themselves grasping, and when, on the other hand, they are puffed up by the flattery of others who aspire to office.  For now, stirred to fury and swayed by passion in all their counsels, they will no longer consent to obey or even to be the equals of the ruling caste, but will demand the lion’s share for themselves. When this happens, the state will change its name to the finest sounding of all, freedom and democracy, but will change its nature to the worst thing of all, mob-rule.

What specific tribunician acts? We need not mean the Gracchi:

145BC – C. Licinius Crassus, tr pl, proposes the popular election of members of the priestly colleges. Laelius, pr, Scipio’s buddy, defeats this through a speech that was to become a famous source on Roman religion.

140BC – Claudius Asellus, tr pl, prosecutes Scipio for the infelicitas of his censoral lustrum, revenge for Scipio’s attempt to demote him in the census.

138BC – C. Curiatius, tr pl, tries to get the consuls to take action on the soaring price of grain and when that fails imprisons them for a time.

Nothing new here.  This perspective shares something with Scullard’s 1960 reconstruction of the political thought of Scipio himself.  I would just rather see it as Polybius’ rather that Scipio’s.  The other direction this conversation usually goes is the the degree of accuracy in Polybius’ assessment (See Sommer for summary; Millar‘s many statement is here.).

So where does Dionysius come into this?  Well, I think that the Coriolanus episode in book 7 is written as a rhetorical answer to Polybius book 6 with Coriolanus cast in a Scipionic like role and contemporary history alluded to in the misguided foretelling of the future undertaken by Manius Valerius.  I think Dionysius is, to an extent like Millar, out to prove that Polybius was right and that the republican constitution had no remedy for healing itself, something new was needed.

Dionysius ‘summarizes’ the early themes of his speech, and then begins in earnest with his constitutional argument, an argument based completely on the anacyclosis and that the Senate must introduce a democratic guard against their own power if they wish to retain it, just as they have guarded against tyranny via the nature of the consulship.  Valerius’ speech becomes Dionysius vehicle for rehearsing a Polybian constitutional view.

He then goes on to say that there is no need to fear demagoguery, because the dictatorship will act as the right and proper check against that possibility: 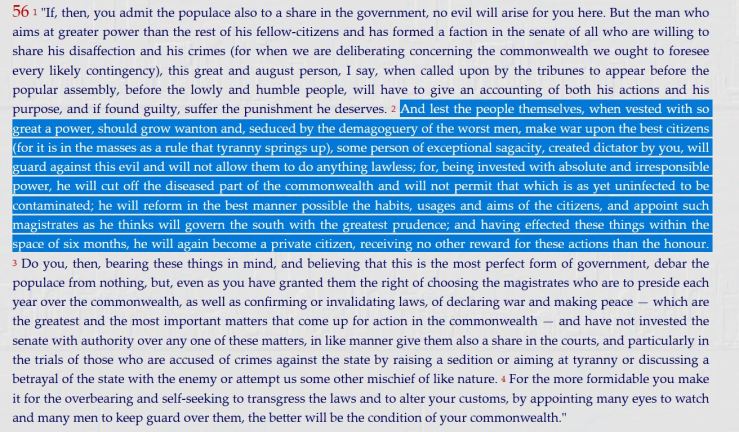 Of course, what Dionysius knows is just how wrong the dictatorship will go through the person of Sulla.  He’s in fact already meditated on its failure in book 4.  The expanding influence of the tribunate will lead to the use of the dictatorship and that in turn will lead to the end of republic.   Dionysius’ uses a few words spoken by Coriolanus to underscore the counterfactual nature of preceding speech:

since the opinion of Valerius prevails, may these measures prove of advantage to you and may I prove a poor judge of future events.

Dionysius the continues his constitutional lesson and firmly aligns his perspective and that of his readers with the Senatorial majority:

the greater part of the senators too were well pleased that he was to be tried upon this charge, for two reasons — first, that to speak one’s mind freely in the senate was not going to render one liable to an accounting, and second, that Marcius, who had led a modest and irreproachable life, would easily clear himself of that accusation.

Senatorial free speech was a key contentious issue in the late republic (I would state the case far more strongly that Raaflaub 2004).  Think of Antony being barred from reading of Caesar’s letters in 49BC to start…

And, we also have hear another false prediction of future, reminding reader to read the whole optimism of the elites towards the masses as counterfactual idealized fantasy.

The constitutional nature of the episode continues with Dionysius playing anthropological participant-observer for his readership, explaining about market days, and trials, and the whole character, structure, and procedures of the comitia centuriata, procedures that are left unfollowed in the narrative itself.

Dionysius then stops the narrative to speak directly to the audience about the tribunate in his own day and the historical importance of the moment he’s just described as a constitutional turning point.

I would speculate that if the whole of Polybius’ Book 6 survived we would see many more concrete intertexts between it and Dionysius’ account of Coriolanus.