Below is a half finished post.  Maybe it will be of interest to me again sometime in future.  I rather wish before I started writing it I knew about this website:

PXII is known by the pejorative epithet, Auletes, but ascended the throne originally as: Theos Philopator Philadelphos Neos Dionysos.

Whether PXII was born to a Ptolemaic queen or a Egyptian Concubine is a point of dispute in the ancient sources and among modern scholars.  Here’s a use full footnote of references (Siani-Davies 1997):

It would be more useful if the references were accurate.  The prologues to Trogus (not Justin) say nothing about the PXII’s parentage.

It would have appeared some where in these lines of Prol. 40:

How at Alexandria, after the death of Ptolemy Lathyrus, he was replaced on his death by his sons: one was given Cyprus, which the Romans took from him following the proposal of P. Clodius; the other fled to Rome when his arrest was called for during an uprising in Alexandria, and he later regained his imperium thanks to the war fought by Gabinius. On his death his son succeeded who, quarreling with his sister, Cleopatra, murdered Pompey the Great and also went to war with Caesar at Alexandria.

Justin’s epitome of Book 39.4 is the most promising source:

In Egypt, Cleopatra, being dissatisfied at having her son Ptolemy to share her throne, excited the people against him, and taking from him his wife Selene (the more ignominiously, as he had now two children by her), obliged him to go into exile, sending, at the same time, for her younger son Alexander, and making him king in his brother’s room.

The assumption seems to be that the Latin, indignius quod ex Selene iam duos filios habebat, refers to Auletes and the future king of Cyrene.  But it was Cleopatra IV, not Selene who was driven into exile…

Justin’s epitome of Book 40 ignores Ptolemaic history.  There is a similar reference at 39.5.2:

During the course of these proceedings, his natural brother, to whom his father had left the kingdom of Cyrene by will, died, appointing the Roman people his heir;

That’s Watson’s translation from 1853.  Yardley gives it as:

Meanwhile, Ptolemy’s brother died. The son of a concubine, this brother had been left…

The Ptolemy under discussion here is PIX Lathyros, brother and rival of PX Alexander I.  So this doesn’t help us get closer to PXII’s lineage.  His father is clearly PIX Lathyros; the mother is in doubt.  What this might help us with is proof that the son of concubine could ascend a throne in the Ptolemaic world at this time.

…Shortly after this Ptolemy met with his appointed fate, and the Athenians, who had been benefited by him in many ways which I need not stop to relate, set up a bronze likeness of him and of Berenice, his only legitimate child.

The relevant bit of the Greek is pretty clear: ἣ μόνη γνησία οἱ τῶν παίδων ἦν.  Although this could at a stretch mean his only legitimate female off-spring…  Pausanias seems to be seeking an explanation of why there is a statue of Berenice and legitimacy offers one possible explanation.  She was also a very beloved figure unlike many other later Ptolemies.

Josephus Jewish Antiquities 13.349 has no direct comment on the matter:

but she immediately marched against him, with a fleet at sea and an army of foot on land, and made Chelcias and Ananias the Jews generals of her whole army, while she sent the greatest part of her riches, her grandchildren, and her testament, to the people of Cos.

We could only question whether Cleopatra, Mother of PIX, would describe the children of concubines as τοὺς υἱωνοὺς.

Appian, Civil War 1.102 is the most clear by implication, but does not actually speak to the issue directly:

Sulla decreed that Alexander (the son of Alexander the former sovereign of Egypt), who had been reared in Cos and given to Mithridates by the inhabitants of that island, and had fled to Sulla and become intimate with him, should be king of Alexandria. He did this because the government of Alexandria was destitute of a sovereign in the male line, and the women of the royal house wanted a man of the same lineage, and because he (Sulla) expected to reap a large reward from the rich kingdom. As Alexander behaved himself in a very offensive manner toward them, relying upon Sulla, the Alexandrians, on the nineteenth day of his reign, dragged him from the palace to the gymnasium and put him to death; so little fear had they of foreigners, either by reason of the magnitude of their own government or their inexperience as yet of external dangers.

The implication could be that neither Alexander or Auletes was borne from wedlock, but equally it could only mean that no other male candidate was in Egypt claiming the throne.  Or, it could be that γένους refers to PXI Alexander II’s Greekness not his familial connection.

Appian Mith. 29.93 doesn’t make any sense as a reference.  I think maybe this was supposed to be 23:

In the meantime Mithridates crossed over to the island of Cos, where he was welcomed by the inhabitants and where he received, and afterward brought up in a royal way, a son of Alexander, the reigning sovereign of Egypt, who had been left there by his grandmother, Cleopatra, together with a large sum of money

This is confused as there is only one son of Alexander mentioned and no other grandchildren.  We know from other sources it  was plural.

This footnote and set of sources I’m working through is all supporting this one sentence (Siani-Davies 1997: 308):

and when the new king ascended to the throne his right to rule was contested even by his own (probable) mother, Cleopatra Selene, who in 75 journeyed to Rome as the advocate of her two other sons who were said to be of ‘undoubted’ Ptolemaic provenance and hence prospective claimants to the throne of Egypt

This may be the context of the sarcastic context of Cicero’s comment in the Verrines about the importance of Verres potential future input on foreign affairs if acquitted (2.2.76).

However, let him come; let him vote war against the Cretans, liberty to the Byzantines; let him call Ptolemy king; let him say and think everything which Hortensius wishes him. These things do not so immediately concern us—have not such immediate reference to the risk of our lives, or to the peril of our fortunes.

The discussion later in the Verrines mentions the the two Syrian kings’ petition for Syria on behalf of themselves and their mother BUT not the presence of Selene in Rome.

That pattern of confusion over Ptolemaic genealogy is not limited to to PXII: 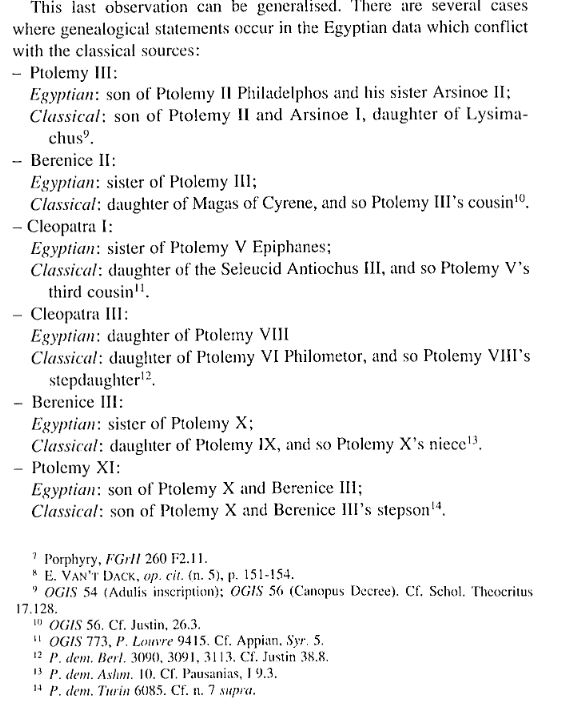 Notice how thin on the ground the actual source material is.  So much of this depends on inference.  Bennett continues to argue that there were ideological/religious reasons for Egyptian source to lie and thus the classical (Greek/Roman) are to be preferred.  I find this not wholly convinciny.  It is, however, fair to say from any perspective that Ptolemaic female lineage is malleable in its public presentation.