I am at a quandary how to read this token type and its later legacy.  I think its ambiguity may be intentional.

“United for the Reform of Parliament 1795”

“May Slavery and Oppression Cease Throughout the World”

And (not visible in the image above) around the edge: “An Asylum for the Oppress’d of all Nations”

This token is a rarer variety of this more common issue without the clasped hands:

The figure on the left is older as indicated by his beard he shows a three youth how easy it is to break a single twig with his bare hands, while bundle of sticks at their feet could not thus be broken (fasces imagery?!).  The composition (but not the metaphor?) is inspired by a Roman seal ring type:

I became interested in the London Corresponding Society for the actions of 29 June 1795, particularly the use of stamped biscuits with slogans as a means for disseminating their message:

On the biscuits targeted at the masses gathered at the protest, slavery is metaphorical, not literally an abolitionist message.  As an interesting aside I think it likely that it was this character, Adam Steinmetz of Limehouse, who was on trial with other members of the Society in October who likely produced said biscuits:

Does this mean that slavery was always metaphoric when used in the rhetoric of the society?  Not so: 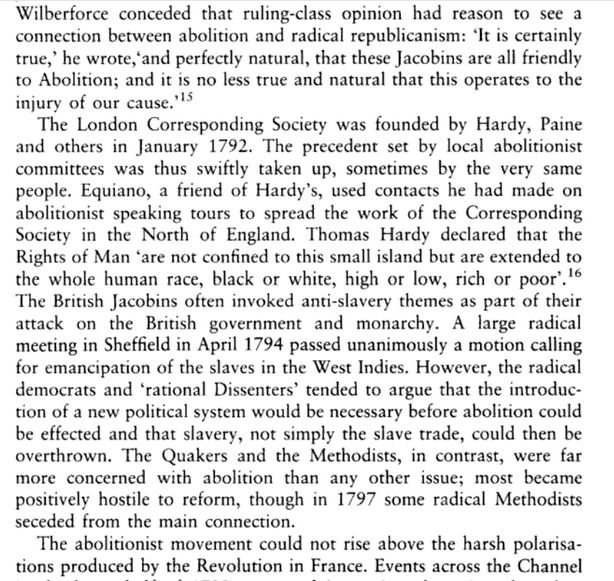 In short it was advantageous in many ways to the cause of parliamentary reform to link themselves with the abolitionist movement and there was a significant overlap between the two groups.  However, the parliamentary reform movement, held just that, better democracy in British government, to be the highest end goal, not the abolition of slavery, which would be only a reflection of the enactment of democracy.

Why does this matter?  Because at the same time, perhaps in the same work shop, were being made abolitionist tokens such as these: