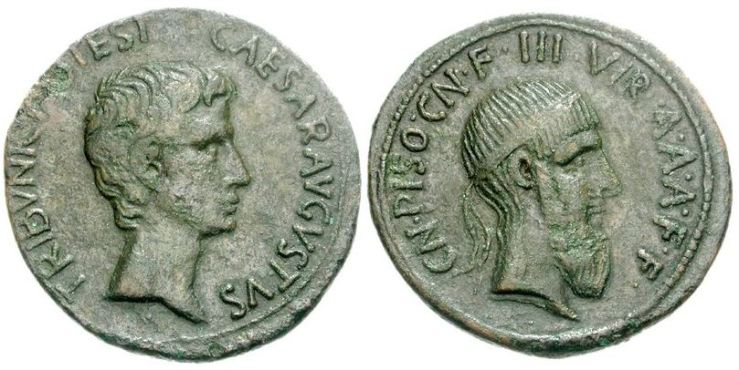 Just a hunch but I doubt it was very politic to have chosen a Pompeian type, even if familial, for resurrection on the coinage under Augustus…

Numa is the second legendary king of Rome and more than the individual heroic founders of the city (Aeneas, Romulus, etc…) he gets his own numismatic commemorations in the late Republic. Moreover, he’s commemorated by a number of families in a variety of styles. The moneyer on this specimen has put Numa’s name on the diadem to save room on the flan for for his own name!

Perhaps most interesting is this denarius where his ‘portrait’ is unlabeled on the obverse:

But which is clearly identified with a legend on the bronze coinage in the same series:

Ancus Marcius, his grandson, also gets an obverse of his own:

Some of these commemorations are simply tying the moneyer to the legendary kings of Rome, but the the narrative of these kings was also particularly attractive. Numa especially was remembered for establishing religious traditions and thus the state’s continued well being through a correct relationship with the gods.

The last few days as I’ve been writing just about every image seems to me to lead to five new thoughts, leading off in a dozen different directions. I find I keep telling myself ‘not now!’ come back to it later. And yet, just the time to put a note in the correct file or update an old blog post (which amounts to the same thing these days) so I can come back to it later seems to consume all the space for writing. “Where was I?” feels like a constant refrain. I need to find away to stay more focused and efficient as a I fact-check what I’m writing. Perhaps that’s the difficulty: that I want to check my accuracy as I write, instead of saying what I generally believe to be true and then editing and correcting at a later stage.