I started by trying to caption RRC 59/5. And then I went an reread an old post of mine on Dolabella ‘ s as moneyers or possible moneyers.  And that got me worried about the dating of both RRC 73 and RRC 59 given the redating by Russo of RRC 81.  RRC 73 isn’t in any hoard earlier than Bavagna which closes ~116 BCE.  So Sicily and 2nd Punic War seems a not obvious necessary ID – Crawford’s weight standard argument is less conclusive if we add in 4 recent specimens in trade (average of 8 known specimens, comes down to 4.15, SD .251).  I then went digging in specimens that have come up in trade to see if I could sniff out any wisdom or clues.  All I found so far is this odd die feature (also visible on BM 2002,0102.330 ex Hersh Coll.). 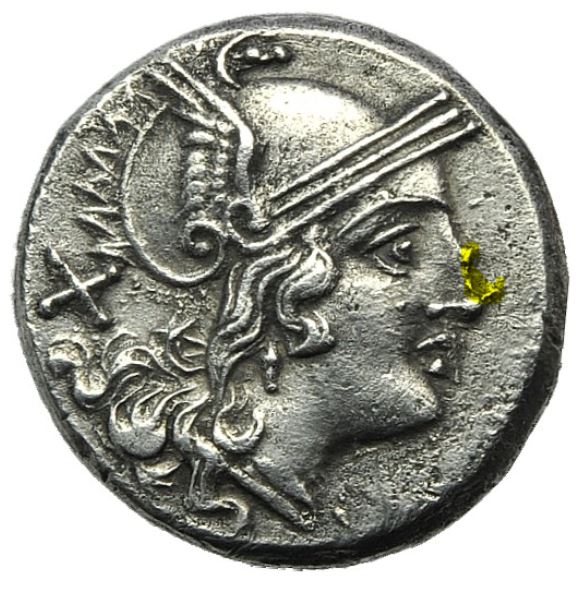 Other things I learned today is that the Rex Sacorum probably didn’t wear an apex (I’ll report back as I get in more ILL) and that nobody agrees which figure is which on the Ara Pacis.  So there.  A post of no conclusions.  Just a lot of time spent fretting about a stupid hammer and a possible canting pun.