Not sure how I didn’t make the mental connection prior to this but… the guy celebrated on this coin (RRC 401/1) is the same dude, Manius Aquillius, cos. 101, Mithridates’ killed by pouring gold down his throat! 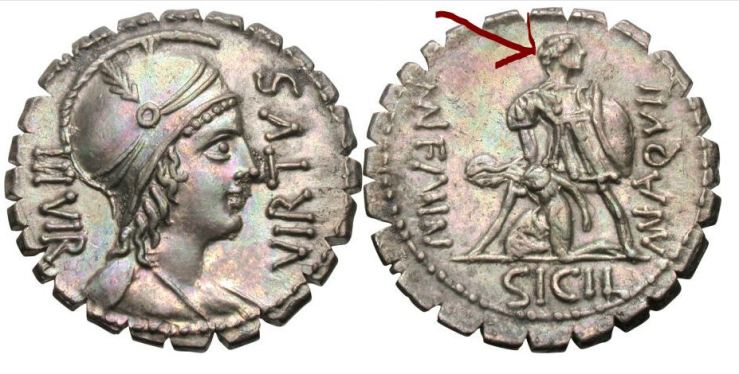 I find it remarkable that a father with such a checkered career was rehabilitated by his son as the epitome of virtus.  Besides his death he was put on trial for his mismanagement of Sicily and he was given an ovation, not a triumph because he only fought against rebel slaves… (links to ancient sources)

How you die by this method is discussed in this Smithsonian article (the evidence that Crassus died this way is questionable).

Part of a speech from Posidonius preserved in Athenaeus from the Athenian usurper, Athenion:

‘King Mithradates is master of Bithynia and Upper Cappadocia; he is master of the whole continent of Asia as far as Pamphylia and Cilicia. And kings form his bodyguard, Armenian and Persian, and princes ruling over the tribes who dwell round the Maeotis and the whole of Pontus, making a circuit of three thousand six hundred miles. The Roman commander in Pamphylia, Quintus Oppius, has been delivered up and now follows in his train as a captive; Manius Aquilius, the ex-consul, who celebrated a triumph after his Sicilian campaign, bound hand and foot by a long chain to a Bastarnian seven and a half feet tall, is dragged along on foot by a man on horseback. Of all the other Roman citizens, some are prostrated before the images of the gods, while the rest have changed their dress to square cloaks and once more call themselves by the countries to which they originally belonged. And every community, greeting him with more than human honours, invokes the god-king; oracles from all quarters predict his supremacy over the civilized world. Wherefore he is dispatching great armies even to Thrace and Macedonia, and all parts of Europe have gone over to his side in a body. yes, ambassadors have come to him not only from Italic tribes, but even from the Carthaginians, demanding that they be allies to accomplish the destruction of Rome.’

1 thought on “Death by Gold”