The betrayal of Brutus’ sons and their execution at their father’s orders to preserve the newly founded republic is well known in literary sources, but rare in Roman art.  Here we might have a rare instance:

Alternately these intaglios represent the sacrifice of the Trojan prisoners, but that usually puts the emphasis on a single figure.

The only other representation I know of the killing of Brutus’ sons is from a late Silver Lanx: 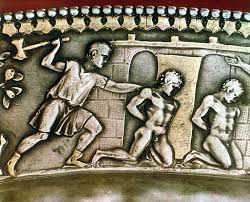 Link to early publication on JStor.

Read this old catalogue entry and wonder if this specimen might look something like those above.  The BM has not photographed the piece. 😦

Could the gems above really be Orestes and Pylades?  As I wrote about in a previous post this story had great theatrical/moral resonance in the late republic, or so Cicero says.