There is a good deal of concern and attention paid to the divine honors given to the personification of abstract concepts.   The habit has it origins in the Hellenistic period.  Think of the Nikes we’ve seen, not to mention much more famous examples: 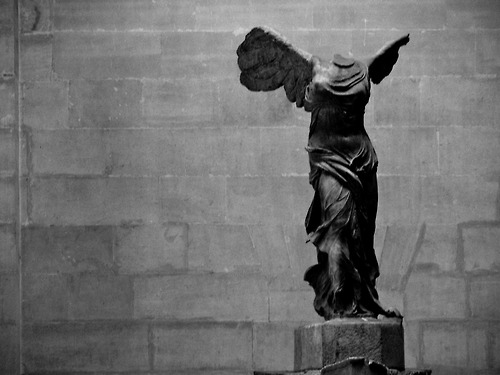 All of these turn the idea of ‘winning’ into a goddess who can not only be represented in art but also given cult honors, from temples to sacrifices to prayers and hymns.  The Romans took this practice to great heights.  Click on that link “care and attention” above for discussion.   Of course they did not have a monopoly, but we usually think of them influencing their neighbors.  We’ve seen the Locrians representing Pistis (= Fides = Loyalty) crowning Roma before.  Strangely that coin isn’t usually discussed in context of the coin above also minted at Locri.  It represents (and labels as such) the goddess Eirene (= Peace).  The style of the reverse is modified from the coin of a neighboring town:

Yes that’s a Nike on this AR Stater, Terina, Bruttium, 400 BC-356 BC.  The bird is a rather different attribute. Something to chase up another time…

What the Eirene coin does is contextualize the Pistos / Roma coin by letting us know that the Locrians are already well versed in thinking about abstract divinities: they don’t need the Romans to help with that.

Pax won’t show up on Roman coins until 82/81 BC at the earliest:

The identification of the obverse here is far from certain.  The first secure appearance isn’t until 44 BC and the is a very rare coin indeed:

Pax may not have had a cult site in Rome until the Ara Pacis!