The numismatic equivalent of archaeological stratigraphy is the overstrike — cases where an older coin is used instead of blank flan in the minting process.  When we can identify the undertype we have a precise means of identifying a chronological relationship between the two types.   However sometimes they tell other stories too…

This is a Sextans (= 1/6 of an As).   Mercury is the traditional deity indicating this denomination.  However, it is over struck on a Uncia (= 1/12 of an As; Roma in an Attic helmet is the associated divinity).   How is this possible? What is going on?

First some background about Roman weights. 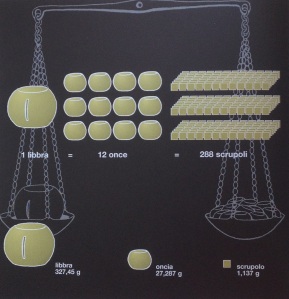 This handy visual aid is from p. 28 of this great museum catalogue.  Originally the As was equal to a Roman pound which on a base 12 system divided into 12 ounces or uncia.   The as had fractions, semis (1/2 as = 6 uncia), triens (1/3 as = 4 uncia), quadrans (1/4 as =3 uncia),  sextans (1/6 = 2 uncia), and the uncia itself.  Crawford likes to use 324 grams as the conversion from modern weights to Roman pounds: it’s close enough and divides nicely by 12.  He also observes that full weight as is just about as much bronze as can comfortably fit in the palm of a hand.

So in 217 in the dark days of the 2nd Punic War with Hannibalic in Italy, Rome decides to cut the weight standard of the As in half.  That is to say they now make a coin valued as an as but weighing 1/2 a Roman pound ~ 162 grams.  Over the next six years as the war continues the weight continues to slip downwards eventually ending up with an as that weighted just 1/6 of a Roman pound, i.e. what two uncia or a sextans weighted before 217!  Not exactly the sign of a healthy economic situation.  This coin is from the intermediate stage.  It shows the Romans taking a coin that used to be valued as an uncia and revaluing the exact same piece of metal at double its original value.

This is the road that leads from an intrinsic value bronze coinage to a token bronze coinage.  The silver was not untouched by the Hannibalic War.  We can thank the same economic stressors for the creation of the denarius (10 asses!) in 211BC.  In time the denarius itself would end up retariffed at 16 asses, c. 140 BC, but that story will have to wait.