A post in which I simply chase up the details in a delightfully dense Crawfordian footnote.

He likewise vowed to celebrate a musical and dramatic festival in honour of the gods, which should cost three hundred and thirty-three sestertia, plus three hundred and thirty-three denarii, plus one third of a denarius. This sum, in Greek money, amounts to eighty-three thousand five hundred and eighty-three drachmas, plus two obols. Now the reason for the exact prescription of this particular number is hard to give, unless it was thereby desired to laud the power of the number three, as being a perfect number by nature, the first of odd numbers, the beginning of quantity, and as containing in itself the first differences and the elements of every number mingled and blended together. (Plut.Fab. 4)

They ordered five hundred minae of silver to be expended every year upon the sacrifices and the games, a sum the Romans laid out on the festival till the time of the Punic War (Dion. Hal. 7.71.2)

The key phrase here is ducenta milia nummum = two hundred thousand coins.  No mention of the ‘sestertii’ that had me worried in Crawford’s summary of the evidence.  Really this is the best evidence he has going for his argument on original cost.

How likely is it that the Greek authors are just confusing sestertii and asses?  A first I found this possibility rather a stretch, especially given Plutarch going out of his way to transliterate the denominations into Greek.  But on the other hand the sestertius does replace the as as the unit of account with the retariffing of the denarius.  So it might be logical to assume the unit of account was the sesterius at an earlier era.

[My life would be less complicated if I had just conceded Crawford was likely to be right before digging through all these refs.]

Do we have to go with Plutarch and say the number is just symbolic.  I’d rather believe Crawford, than Plutarch.  Can we make the numbers work?

Here is a table of hypothetical total weights of the coins spent on the ludi based on the different offering costs at different weight standards: 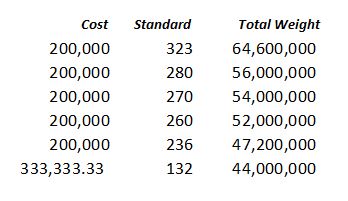 236g is what Crawford says RRC 36 fell to before the introduction of RRC 38 which he says was based on an as of about 132g.   Sure our understanding of these standards is fuzzy, but enough to short change the gods by at least 3.2 metric tons of bronze?!   That’s nearly 4 1967 VW bugs of bronze.

Let’s go back to Livy.  He is probably responsible for this nonsense with the numbers.  The passage where our quote above come from actually starts in preceding chapter (22.9):

Q. Fabius Maximus was now Dictator for the second time. On the very day of his entrance upon office he summoned a meeting of the senate, and commenced by discussing matters of religion. He made it quite clear to the senators that C. Flaminius’ fault lay much more in his neglect of the auspices and of his religious duties than in bad generalship and foolhardiness. The gods themselves, he maintained, must be consulted as to the necessary measures to avert their displeasure, and he succeeded in getting a decree passed that the decemvirs should be ordered to consult the Sibylline Books, a course which is only adopted when the most alarming portents have been reported. After inspecting the Books of Fate they informed the senate that the vow which had been made to Mars in view of that war had not been duly discharged, and that it must be discharged afresh and on a much greater scale. The Great Games must be vowed to Jupiter…

It goes on a long while about all the special religious actions that must be taken before getting to how the Great Games are to be celebrated, i.e. at a cost of 333,333 and 1/3 asses.  These aren’t necessarily then the ordinary September ludi Romani, but a special war time initiative to make Jupiter and the gang extra happy.   We probably need to see the extra expense as a symbolic attempt rather than because of any religious anxiety about short changing the gods.

This is unfortunate.  It kind of makes a mess of this really interesting  possible terminus ante quem for the introduction of the semilibral standard.  : (

Anyway, just for completeness here is the footnote from OGIS 480 [image links to page with footnote,ref links to start of inscription]: