This morning, I was reading through all the goodies that ILL has delivered electronically during the post-Passover flood of activity back in Brooklyn and was just dead impressed (again) by the types of connections Michael Crawford can make.  This paragraph above is from a relatively hard to find conference volume:

The rest of the article will be of interest to numismatists for his comments about the choice to use Greek on the coinage being a reflection of coinage as a ‘Greek phenomenon’.  He also has some good comments on the choice of types by the Marmertini.

I’d love to have a photo of the front of the altar in the passage quoted above.  I’ve put the Rix on ILL order.   In case you’re unfamiliar with the awesome Pompeii inscription here are my comments on it in print:

Here’s an old pic I took when writing that article:

The one point I’m a little fuzzy on is did anyone actually record seeing a Latin inscription on the plaster over the Oscan one in Pompeii?   Or are we just assuming it must have had one?  Also could some high tec imaging process allow us to see under the Mamertine stucco inscription to let us read what if anything it is covering up?

This raises some questions in my mind about the readings of the first and penultimate letters on the first line.  The old catalog reads them as R (Oscan for /d/) and D (Oscan for /r/).  Rs and Ds cause no amount of confusion in their Oscan reversal, notably in antiquity at Larinum.  The new catalogues (HN Italy and BM online) both read the same letter in both positions… r  … by which I assume they mean an Oscan D …  you see how the confusion can creep in!

There is even some discussion of the legend on the Italy Wikipedia page.

Mario Torelli in his Studies in the Romanization of Italy (1995) proposes a resolution of the mystery. His interest comes from a desire to resolve the names of deities on cippi from Bantia, one of which reads RAVE: 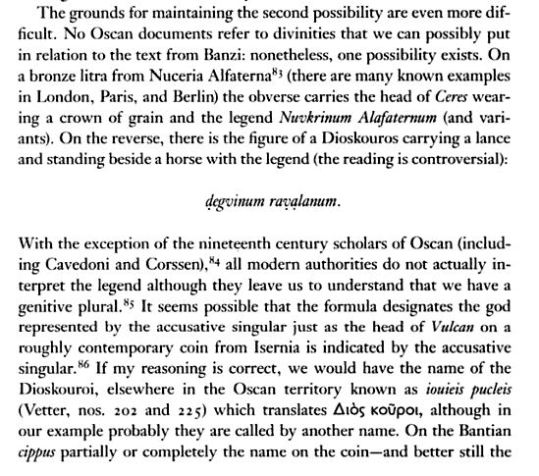 His argument is complex and he quickly shifts into aligning the Dioscuri as the Penates, an issue we’ve discussed before.  His resolution doesn’t seem immediately obvious to me, as it seems to require us to believe the name of the gods was broken in the middle and written on two lines and does not explain the full text.  It comes down to the two inscriptions sharing at most a three letter sequence in common.

I’d really like to see a publication of the coin type with high quality images of the specimens and some discussion detailed reasoning by an Oscan expert, something I am most certainly not!

Check out the legends on each side of this coin.  They are both FRENTREI, but with the Rs looking for all the world like Ds and the F like an 8.  Oscan isn’t really that far off the Latin or Greek alphabet:

It’s main difference is that its written right to left (like Hebrew and Arabic), rather than left to right (like English and kin).  I like the above specimen because it has the same name written in different directions on each side.  L>R on the obverse; R>L on the reverse.  It’s as if we get a little window into the moment of evolution of the language among the Frentani.

It uses a locative ending like the first coin of Larinum to show a Roman influence.  The coins of Larinum during the Hannibalic War period continue to be of influence for the swap between Oscan and Latin and the D/R letter forms (see Rutter in HN Italy, no. 624).

post script.  Doesn’t the little beanie hat style of Mercury’s wings remind you a little of how they were rendered on Suessa’s bronzes… or at Teanum ?

This coin is only known from one unique specimen in Paris.  {Irritatingly the digital catalogue entry has the wrong image linked to it as of 7/20/18}   Its authenticity seems guaranteed by the accuracy of the Oscan language inscription, which at the time of its first documentation was not yet fully understood.  Photos on the internet are hard to find.  The wikipedia entry is okay.  Heck, I’m impressed it has an entry or sub-entry.  I’ve taken the image above from Wyler’s 2008 article.

Mostly I’m writing this post to make a note of Mattingly’s rather under-acknowledged theory that this is not a Social War coin at all, but a product of the Mithridatic Wars (2004: 189-192). The usual explanation is that the Italians copied the type from the bronze of Amisos:

And that thus it represents tangible proof of the suggestions in the literature that the Italians sought (and perhaps obtained?) support from Mithridates (Diod. 37.2.10; Athenaeus 5.213C).  My enemy’s enemy is my friend, as they say.  On Dionysus imagery during the Social War, see:

Anyway, Mattingly focuses on this passage from Plutarch’s Lucullus:

Mithridates was now resolved upon the speediest possible flight, but with a view to drawing Lucullus away, and holding him back from pursuit, he dispatched his admiral, Aristonicus, to the Grecian sea. Aristonicus was just on the point of sailing when he was betrayed into the hands of Lucullus, together with ten thousand pieces of gold which he was carrying for the corruption of some portion of the Roman army.

He thinks that the Parisian specimen is one of these pieces of gold and that the Oscan was used to unsettle the Italian troops in Lucullus’ army and encourage them all the more to revolt.

This seems even more far fetched, than the Social War explanation.  Really the problem comes down to there only being one of these gold coins.  We have no comparative evidence or geographical data, let alone archaeological context.  We remain in the realm of speculation.  Anyway, just to make this post a little more complete, we should note that a similar bust of Dionysus does appear on the Italian’s silver coinage: