This post is hot on the heels of the last.  There is a lot going on in the numismatic world of SE Italy during the Hannibalic War.  I wish I had a copy of Marchetti’s Histoire économique et monétaire de la deuxième querre punique (1975) to hand.  I can’t let go my concerns about the CA series and its attribution to Canusium, especially when the Latin colony Venusia just 40km up the same river valley and on the Via Appia (the better road!) was Marcellus’ base of operations and thus hosting many soldiers in need of payment. So I thought I’d peak at the Venusian coins–I can’t type Venusian without smirking and thinking of hippy-dippy alien theorists–but in all seriousness I observe a couple of things:

No this isn’t  a smoking gun, but if I was a Roman general looking for a mint in the Aufidus region I think I’d pick a colony near a troop base on a main road, even if they were a little lazy about not recasting flans.

Burnett, and HN Italy following Burnett, read GA.Q, not CA.Q, but C/G are pretty much the same letter form in this period and most subsequent ones.  The letter forms are different from the CA on Roman coins and I can’t actually bring myself to say RRC 100 is actually close in ‘style’ to any of the Venusian specimens I’ve looked at.

This is not the only coin in the region that seems to be signed by a quaestor.  Reportedly (I’ve not seen an image) Naples, S.2219 = HN Italy Brundisium 749 reads M.PV Q.   Brundisium is also a Latin colony and a major military staging post in this period of the second Hannibalic War.  In fact it seems THE major port and certainly M. Valerius Laevinus’ original base before he started his cross Adriatic shenanigans.   Brundisium’ coinage is signed by a bunch of magistrates.  And most of M.PV’s coins aren’t labelled with a Q.

These two instances of quaestors at Latin colonies got me thinking about quaestors and coinage more generally.  As I’ve said before, there isn’t a lot of evidence on 3rd century quaestors generally and that part of what made the signed Egadi rams special, but here are two more quaestors.

Are they local quaestors?  Probably, the lex Osca Bantina of the late second early first century BC mentions quaestors in its list of magistrates and it is thought to derive from an earlier Venusian prototype (Bispham 2007: 142-152, p. 143 n. 124 lists other examples of Italian communities borrowing the structure of Rome’s magistracies).  That said, Badian in his 1975 article on the quaestorship spent a lot of time thinking about the Roman expansion of the quaestorship and the growth and change of the coinage system.  These two minor examples might lend a little weight to the idea of a third century connection between coinage and quaestors.  And might help point the way towards how we should be thinking about some of the unidentified signatures on Roman series. …   Early posts on quaestors.

A slightly clearer image of the coin above taken from Carroccio 2008: 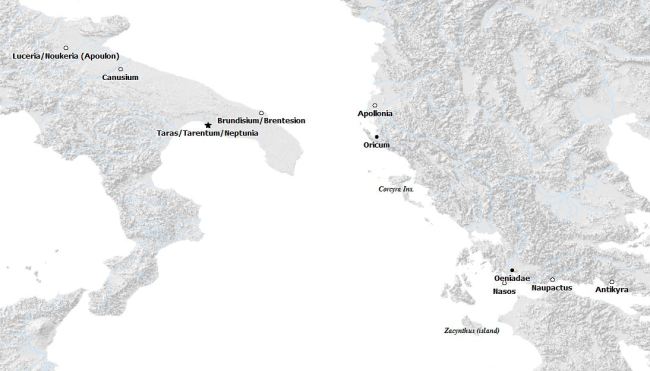 Yesterday I spent nearly the whole day worrying about M. Valerius Laevinus and his adventures of 215-210 BC.  That is from when he was sent to the Adriatic to keep Philip occupied until his return to Rome to accept the consulship.  It was a good day.  I even reread an essay I wrote as a grad student in November 1998.  I knew things then apparently that I no longer know.  So strange.  I rather like the me of sixteen years ago.  Anyway.  The reason is of course to figure out how the coins sit along side the narrative evidence.  The two issues in question are RRC 100 and RRC 101.  There is no doubt that Laevinus’ career resulted in the production of these coins.

The triens of the CA series is regularly overstruck on coins of Oeniadae and the Acarnanian League (Crawford 1974: p. 115, table XVIII, entry 91, specimens a-t and entry 95, specimens a-i).  Laevinus sacked Oeniadae and a host of other Acarnanian places in the immediate follow up to his radical diplomatic arrangement with the Aetolian League.  He had a base on Corcyra and the KOR ligature on the silver is also found on Corcyra’s own coinage:

Other specimens of Corcyra, here.  Besides the map above, I also pulled together the literary sources on Laevinus’ exploits [links to PDF of translations].

The thing that has me a bit concerned is the association of the CA with Canusium.  Canusium had a mint but it used KA on its own coins. The style of RRC 100 is similar to Luceria, where a bent bar L was used on both earlier local coinage and Roman issues from the same mint.   Crawford follows Bahrfeldt ZfN 1895: 87 who in the style of his time says no more than:

“The home of the latter is without question Canusium in whose area pieces of this type are found even now in many cases and also at the site itself, as by the shores of the Adriatic Sea”.

I’m hoping that the new valle dell’Orfanto project can provide confirmation of these early observations.  I’m not surprised that the coins are found on the Adriatic or in SE Italy but I’d like more specific data before insisting that Canusium must be the mint rather than CA standing for, say, a magistrates’ name, such as we presume is represented by the ΓΑ on RRC 101.  Canusium does not seem an obvious location with Laevinus’ sphere of action especially between the sack Oeniadae his recall to Rome.

Also, we need to take the career of Laevinus into account when we consider the dating of the coins.  Based on Livy 26.24 and 26 (see PDF above) it seems pretty clear that Oeniadae was captured late in 211 (after Zakynthos and near in time to Nasus).  Winter 211/210 Laevinus is on Corcyra and spring 210 he attacks Anticyra before heading back to Rome.  So winter 211/210 is the likely date it seems to me of not only the RRC 101 issue, but also RRC 100.  At lastest spring 210 as Laevinus makes his way back to Rome.  To accept Crawford’s date of 209-208 for RRC 100 we have to imagine that after the bronze coins were taken in Laevinus’ raid, they were kept on ice for  between one and three years before being overstruck.  The date of c.209 for this issue is perhaps influenced over much by the literary testimony that Marcellus engaged with Hannibal near Canusium in this year.  But, Marcellus seems to have based for two winters at near by Venusia (a Latin colony, like Luceria), not Canusium itself.  Hannibal seems to have at least some hope of convincing Canusium to come over to his side in 209.

Would Canusium have been on Laevinus’ route back to Rome?  A loyal(ish) town at which to drop off some of the spoils of war for striking?  Maybe, assuming he stopped back at his base of Brundisium and took the fast overland route:

But Livy tells us the general was “overtaken by a tedious illness, and consequently arrived in Rome much later than was expected”.  It’s hard to imagine he wouldn’t have used a litter.  Of course, there is no reason general and booty must stay together.  But it is hard to see the economy of transporting the bronze on a difficult road just to overstrike it…