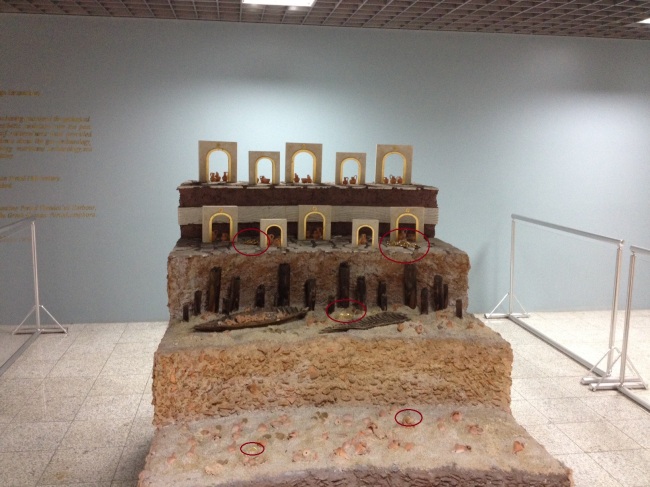 Yenikapi is Istanbul’s major new transportation interchange center.  It links the Marmaray (the new train under the Bosporus) with two of the city’s existing subway lines and has easy foot transfers to the ferry ports and tram and bus systems.  It’s fabulous.  It could teach NYC not just a thing or two, but dozens upon dozens of things.  It also happens to be on the site of the Theodosian harbor.   You can still look down into the massive open air pit filled with hundreds of crates of finds, bones, amphora, and the detritus of everyday life.  And some awesome exposed piers with reused marble facing.  It should be on every history and transport buff’s must see list for Istanbul.

The artistic displays in the station are meant to celebrate the layers of history exposed by the building of the station.  Mostly this is very successful.  However, the display pictured above makes me mad.  Not for the loose interpretation of stratigraphy or historical inaccuracies.  It’s art.  It’s an impression.  It doesn’t have to be true in a scholarly sense, to be true the spirit of the thing.  A transportation hub isn’t a museum.  [Although they do that pretty well in some places in Rome…]

What infuriates me is the sprinkling of fake gold coins throughout the model to make is glittery and appealing.

Treasure hunting is a huge problem in Turkey, not unlike many countries.  I’m not talking about the professional looting of antiquities.  That’s a problem but it’s an organized crime executed by people who know exactly what they are doing.   By contrast, treasure hunting comes from a lack of public education about the value of archaeology for its own sake.  There are no gold coins hidden under the pictures of birds in the Roman mosaics.   Smashing necropolis with sledgehammers or bulldozing Hellenistic foundations will not lead to a pot of gold.

Turkey’s museums are doing an awesome job educating visitors about problems with both looting and treasure hunting.   But, the average Turk who might think about treasure hunting is not the target audience of those museums. The display at Yenikapi will be seen by millions upon millions of Turks and foreign visitors.  The impression it gives is one that gold coins are the bread and butter of archaeology at all levels and all civilizations.  This can only but feed the imagination of the misinformed.

We need to do a better job educating the general public about the historical, cultural, and social value of archaeological finds, not as treasure but as time capsules that can open up a whole new world of knowledge.   Knowledge we can all partake in.  Discovers that cause awe and wonder.  Insights that will enrich our lives.

This display does not help.

No, no.  I must be a historian.  Or a numismatist.  Or an art historian.  Or Romanist.  Or a Greco-Romanist.  Oh wait.  I’m employed — permanently — in a Classics department.  I better get over myself and admit that for all my general ambivalence towards the word and its connotations that I really am a Classicist and this thus must really be a classics blog as it is about my professional life.  [Really, very clearly this is not a food blog.]

This issue came up as I “discovered” [in the Christopher Columbus sense] that there are other bloggers out there.  Hundreds [well dozens] all concerned about those pesky Greeks and Romans and their neighbors and what we do with them today.  What fun!

What’s my hesitancy about the Classics label?  Well, it is a label and I did have a good hippy-full childhood.  [File under Freud.]  Then there is the whole philology thing and given the learn disability with languages…  [Just file under self-esteem and generalized anxiety.]  Then add in the dissemination of the connotations of the word, a.k.a. ‘overuse’ for the purists.  [File under ‘No, I don’t work on Jane Austin or MoTown or Model Ts’.]

Give me a while and I’d come up with a dozen more reasons.  I am a Classicist after all.

The one thing I did notice in my peak into the blogosphere is that we classicists as a rule tend to take ourselves very seriously.  I’m not sure that’s wholly necessary. It’s not like we’re working on something like this:

That is a random plug for just one of my NGO-employed friends.  I just like to keep some perspective on my general relative impact.

On the upside, Classicists do seem to have a great sense of awe and wonder.  That’s no bad thing.