If you you look carefully at the prow stem of this coin of ~151 BC, you will see the head of a woman.  One way of reading this coin is to see the head as Venus and given that moneyer is probably an ancestor of Sulla (I’m skipping the prosopography today), it could then be taken over early proof of the family’s special affection for this divinity.  The denarius of this moneyer has Victory in a biga (two horse chariot) on the reverse; note the wings:

A similar prow stem decoration is seen on the coinage of a Memmius c. 106 BC: 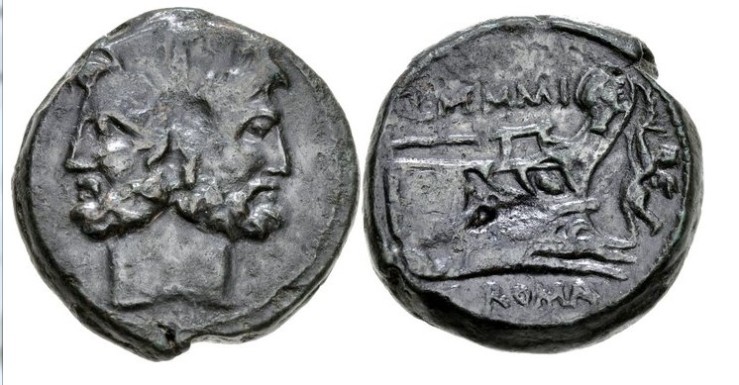 But in this case the die engraver has added a little figure of cupid crowning the prow stem to ensure the identification as Venus goes unmistaken.  More over the reverse of the denarius also shows Venus:

Here it seems clear that we have a reference to the Memmii being of Trojan origin.  Erskine says a little about the family connection (p. 21, 34, & 145) and provides context.

I don’t think the Sulla coin is nearly as clear. If we train our eye to other Roman monuments we quickly see that ship prows, or more properly the acrostolium, are traditionally so decorated.   Take for instance the Tomb of C Vartilus Poplicola from Ostia:

Or the warship relief from Praeneste:

I grant you that this last one is harder to see.  I include it mostly to demonstrate that different female deities occupied this spot and that on reliefs in larger context they are simply part of the decorative program.  Some times identifiable, sometimes not, but not usually read as significant to the overall monument.  See Holliday, p. 97-104.

So the Sulla coin could be Venus but there is nothing in the program of the moneyer to necessitate such a reading.  Heck it could be the head of Victoria!  And if one wanted to go down that route it would be a good idea to read some Clark.