I came across the passage of Crawford below and decided I might kick the main discussion of the type above out of the chapter I’m working on at the moment (Rome and Italy) and put it in the previous one (The Legendary Past).

Since Crawford wrote this passage (RRC II.714) thinking about Lycophron and Roman foundation legends has developed. Here’s Wiseman’s translation of the relevant passage from his Remus:

Coin geeks will know Aphrodite Castnia from the coins of Metropolis in Thessaly [links to an example with a side story from the collector illuminating acquisition practices].  Literary buffs will be more likely to reference Callimachus Iambus 10; Kerkhecker 1999: 207: 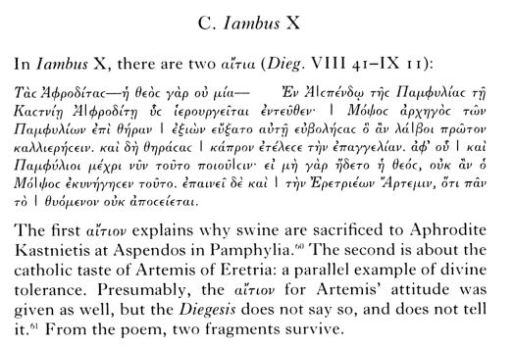 [Other relevant bibliography on Callimachus includes Clayman 1980 and Acosta-Hughes 2002.]

Wiseman 1995 has shown many ways lions may be present in the now lost myths of the foundation of Rome before the establishment of the Romulus and Remus tradition (p. 63ff) and has endorsed Stephanie West’s dating of the above passage and others to the second century (181 n. 5).

The lion and goddess seem to me very much in the South Italian and Sicilian repertoire of iconography (cf. Velia and Syracuse for Lions among other mints), evoking power and divine protection, but not necessarily an intersection with a specific foundation narrative.

And I’m still moving away from Russo’s suggestion that RRC 16, 17, and 23 form a series, amongst other reasons already discussed, because of Crawford’s comments about the different circulation patterns of RRC 16 and 17 in CMRR, p. 38 with App. 9 (p. 285) listing hoards.

The first time I saw an image of this mosaic I thought the spellings of the names very odd.  PWMYΛΛΟC and PWΔC, except the delta looks like it has a tail like a funny iota script.  So perhaps its reads PWAiC, but that doesn’t make much sense either.  At with point I stopped worrying about it because its way after my period and just a distraction from getting this book done.

Then today I started thinking about that odd letter in the twin’s name who isn’t Romyllos or Romulus or however you want to spell it.  I was reading Wiseman’s chapter on L. Brutus in his Unwritten Rome (2008) and I read this fragment of Alcimus (FGrH 560 F 4 = Festus 326-8L):

Alcimus says that Romulus was the son of Aeneas’ wife Tyrrhenia, and from Romulus was born Aeneas’ granddaughter Alba, whose son, called Rhodius, founded Rome.

Wiseman goes on (p. 302 ff.) to explain that ardea means heron and so does rhodios in Greek and so this passage is about Ardea claiming to be founder of Rome.

Anyways.  I doubt a late Syrian mosaicist was following Alcimus or anything.

I always love a good cross-cultural narrative parallel. There is a dreamer in me that secretly wants Jung’s Archetypes to be real.  I’m reading Wiseman’s “Games of Flora” today and he has a nice opening about how Flora under her Greek name, Antho, appears in some versions of the Romulus foundation legend:

But the story which has the widest credence and the greatest number of vouchers was first published among the Greeks, in its principal details, by Diocles of Peparethus, and Fabius Pictor follows him in most points. Here again there are variations in the story, but its general outline is as follows. ….Her name is variously given as Ilia, or Rhea, or Silvia. Not long after this, she was discovered to be with child, contrary to the established law for the Vestals. She did not, however, suffer the capital punishment which was her due, because the king’s daughter, Antho, interceded successfully in her behalf, but she was kept in solitary confinement, that she might not be delivered without the knowledge of Amulius. Delivered she was of two boys, and their size and beauty were more than human. …

So basically the evil king’s good daughter rescues the future leader of the people.  This time before the infant leader is tossed in the river, instead of after.  Still I can’t help but think of the Exodus story.  This led me to a very illuminating look at the character of pharaoh’s daughter in the Jewish tradition.

DAUGHTER OF PHARAOH: MIDRASH AND AGGADAH

What does this have to do with coins?  Not much particularly, except that now this coin with the head of Flora will probably get a wee mention in chapter 2 along with the more obvious wolf and twins types: