In view of the fact that the Boii and rest of the Gauls were offering for sale various articles and an especially large number of captives, the Romans became afraid that they might some day use the money against them, and accordingly forbade anybody to give to a Gaul either silver or gold.  (Zon. 8.19)

I came across this odd little quote in the fragments of Cassius Dio in the midst of the narrative of events preceding the Second Punic War.  This got me thinking about the monetization of the region and led me back to this passage in R. Haeussler, Becoming Roman? Diverging identities and experiences in ancient northwest Italy (2013), p. 98:

The chapter from which this is pulled is a nice example of a historian integrating numismatic evidence into the narrative.  Anyway this further led me to discover that all of Ermanno A. Arslan’s publications are online.  A very exciting resource.  And, I also got to read some of the work of Giovanni Gorini who also seems to have put much of his publications online.

So in some regions, like Turdetania in Further Spain [the most unfortunate place name ever!], it has been suggested that the issuing of bronze coinage is a reaction to Roman regional engagement, a vehicle to help with the collection of taxes, etc. So, S J Keay, “The Romanisation of Turdetania” Oxford Journal of Archaeology 11.3 (1992), 275-315, esp. 288ff. By contrast, the current suggestion seems to be that the peoples of Northern Italy were already engaged in the use and production of silver coinage before their engagement with the Romans.

The passage from the epitome of Dio (above) is interesting because of how it sees a connection between the acquisition of silver and gold and military readiness.  It ties trade and commerce directly to war resources. The trade doesn’t give the Gauls more resources–they already have a good deal of material wealth–instead it gives them a type of resource, gold and silver (coins?!) which make it easier to engage in warfare.

And, here’s a nice pic of a padane drachma just so this post has one: 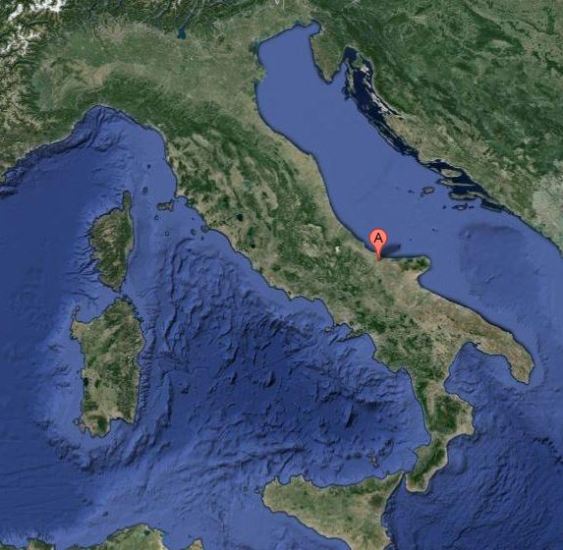 The San Martino in Pensilis hoard and Andrew Burnett’s analysis thereof is probably the most important new information on third century Roman and Italian Silver issues from the last decade.  Highlights included:

My scanned photocopy was really crappy, so I’m just delighted to realize that it’s available open access via Persée.  No more squinting for me today!  I’m also intrigued by the location of this hoard, just north of the Gargano (if you go, you must try the mysterious and delicious Lesina eel!).  It’s just down the road from Larinum (see earlier posts).  The Frentani became allied to the Romans in 304 BC and somewhere around the mid third century Larinum shifted from minting Neapolis type bronzes with Greek legends, to Roman type bronzes with Latin legends (well Oscan language, Latin Alphabet) (HN Italy 622 vs. 623).

I’m fond of Croatia for many reasons. Great landscape. Great memories. One more reason to love the country is their freely accessible database of scientific publications: Hrcak.  Here’s what a simple search for ‘coins’ brings back.  Most publications are in Croatian, but with English abstracts, some are bilingual.  Particularly interesting are the hoard reports…

I was worrying about the conflicting testimony in Livy and Diodorus over Cleonymus of Sparta’s Italian adventures.  Oakley has a good overview of the problem but there is more that can be said on the historiographical side. Barnes also has a take on the matter.

Amongst other things is a place called Thuriae, not Thurii mind you, that features in Livy’s narrative:

During the year a fleet of Greek ships under the command of the Lacedaemonian Cleonymus sailed to the shores of Italy and captured the city of Thuriae in the Sallentine country. The consul, Aemilius, was sent to meet this enemy, and in one battle he routed him and drove him to his ships. Thuriae was restored to its former inhabitants, and peace was established in the Sallentine territory.

[In case you’re wondering, the Sallentine territory or peninsula is the heel of Italy’s boot.]

This little mystery led to finding this 1932 publication that suggests it is the same as Turi, outside of Bari.

The interesting thing about this publication is how it ended up on the web.  The provincial administration of Brindisi seems to have decided in 2012 to scan and archive online pretty much every last regional publication.  Here’s the announcement.  There is as far as I can find no easy portal for searching through all the old newspapers and journals to find the relevant bits, but the archive is hiding lots of numismatic tidbits.   For instance, here’s the publication of the Salvatore Hoard.

The best I’ve found to mine its depths is to use Google site search.  Just go to the google homepage and enter a likely term in Italian, say ‘didramma’, and then ‘site:emeroteca.provincia.brindisi.it’.  Leave off the quotes.

Postscript.  I just don’t think the Cleonymus of Polyaenus’s Stratagems is the same character.  It’s just too early a date for the Romans to control Apollonia and Epidamnus. 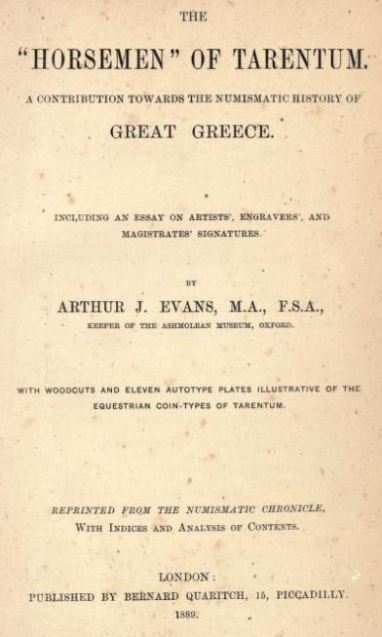 Of course, plenty has been written since Evans but his periods are still widely quoted.  Note especially the work of W. Fischer Bossert on the chronology of the mint. 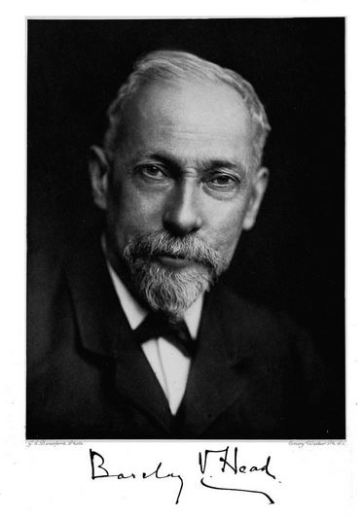 The festschrift for Barclay Head is in the public domain and fully (beautifully) digitized!  What a fabulous portrait.  We should all do so well as to appear so dapper for history.

This provides us with an image of RRC 2/1 that’s wholly in the public domain:

Both Crawford’s image (see last post for link) and this one are taken from casts.  I’m not sure they are the same cast.  Regardless the plate itself is a nice sharp image one can zoom in on. Click on the photo for the link.

Here’s the link to the specific discussion of the type in the festschrift.

I couldn’t do my research without the hard laboring librarians of ILL.  Those at my own institution process and vet my innumerably requests, but others all over the world slave at scanners to bring me tidbits of information.  My favorite part is when I find a little trace of their humanity in the margins of my scans.  Thumbs of glory disseminating esoteric knowledge free of charge.  Or, more accurately, as all the coversheets now say:

Anyway in honor of the thumb above: ” Dear Librarian of Binghampton University, THANK YOU!”

I’ve often griped about things behind the paywall of major publishers.  Case in point, I just put a line in a grant request for a year’s access to Brill’s New Jacoby: a new necessity for historiographical research that I can’t access via ILL.  And even at an outrageous cost it is still has significant weaknesses.  Anyway, I was pleased and intrigued to learn about this new approach from this blog:

which includes this sub-project:

This is a great move forward for access and maybe even for interface, but how will it move us forward in terms of new scholarship?  Will those outside the research one institutions be forever stuck behind the ultimate paywall of the 70 year public domain for esoteric digital resources?

The dirty little secret of the academy is illegally digitized books.  I’ve check the pirated sites that have a richness of academic titles.  My first book has been pirated.  Dozens perhaps dozens of dozens of individuals are now reading it on bad scans rather than checking it out from the library or may one or two of them buying it.  Gotta say.  I don’t really mind.  It is dreadfully expensive. Even at a 40 percent author’s discount I didn’t buy many copies, just enough for my tenure file.  I certainly don’t have a spare copy!

At least the print nature of a book makes it more able to A) be legally borrowed from a library or B) pirated.  Databases like the BNJ are because of pricing and the high degree of specialization of their subject matter to only a few wealthy institutions which are willing to pay for access for their members.

So for now I’ll cheer on LOFTS and its ilk.  (While groaning at yet another acronym!)  And, I’ll twiddle my thumbs hoping that my wee little grant is approved so that come next July 1st, I too might have the privilege of accessing the BNJ.