This raises some questions in my mind about the readings of the first and penultimate letters on the first line.  The old catalog reads them as R (Oscan for /d/) and D (Oscan for /r/).  Rs and Ds cause no amount of confusion in their Oscan reversal, notably in antiquity at Larinum.  The new catalogues (HN Italy and BM online) both read the same letter in both positions… r  … by which I assume they mean an Oscan D …  you see how the confusion can creep in!

There is even some discussion of the legend on the Italy Wikipedia page.

Mario Torelli in his Studies in the Romanization of Italy (1995) proposes a resolution of the mystery. His interest comes from a desire to resolve the names of deities on cippi from Bantia, one of which reads RAVE: 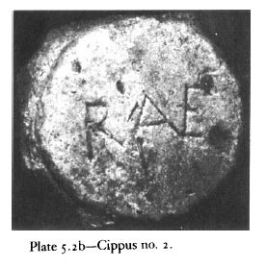 His argument is complex and he quickly shifts into aligning the Dioscuri as the Penates, an issue we’ve discussed before.  His resolution doesn’t seem immediately obvious to me, as it seems to require us to believe the name of the gods was broken in the middle and written on two lines and does not explain the full text.  It comes down to the two inscriptions sharing at most a three letter sequence in common.

I’d really like to see a publication of the coin type with high quality images of the specimens and some discussion detailed reasoning by an Oscan expert, something I am most certainly not!

So I’d been revising my thinking on the Cora didrachm a bit of late and that made me wonder if I needed to also think again about Nuceria issues.  Crawford lumps them together, speculating it was a means of distributing booty.   I was pleased to see Nuceria specimens next to Suessa specimens in this hoard even if they will be much earlier than its deposition date: 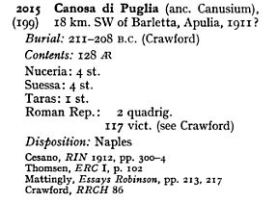 The original 1912 publication is much more detailed.

Update 4/16/2014:  When thinking about Nuceria and Cora and how their striking relates to that Teanum, Suessa, and Cales, don’t forget the silver didrachms of Paestum, again very rare and the jury is still out on dating (HN Italy 1180).   Image here.