It may not be immediately obvious but this little spate of blog posts are all coming out of my efforts to wrap my head around representations of Monarchy on the Republican Coin Series, a topic I’m attempting to work up for a conference paper submission today.

Crawford proposed Mercury as an other possible identification of the intended deity.  The iconographic parallel is striking but I find myself ambivalent about whether it is just an artistic choice of style or an intended reference to the Pontic king.  It’s part of a complicated series perhaps alluding the the cult of Fortuna at Praeneste and/or other Italic cults.  How it fits into the series as a whole has alluded explanation.

I would just note that with the new dating based on the Messange Hoard of RRC 405 to 58 BC, this potential regal allusion comes in the midst of a spate of such allusions to foreign kings on the reverses of the series:

Sometimes I tell myself I’m too obsessed with the connection between gems and coins.  And then one of my hunches pays off and the obsession comes back full swing.  In case the above image doesn’t set off exciting alarm bells in your head, allow me to remind you what the coins of Signia, a Latin Colony, during the Pyrrhic War looked like:

[I show this particular specimen just so I can point out that it reappeared back on the market with a brand new patina, all nice and shiny and toned just one year later, and fetched a much higher price.  I think it looked just lovely before some one decided to ‘fix’ it.]

Let me assure you that the gem above is by no means a one off.

And based on descriptions without images the Thorvaldsens Museum has a number more similar gems, Inventory numbers: I1537,  I1539,  I1722, I1536.   The last two are of particular interest as they are glass pastes which suggests the image had resonance with members of a variety of different social classes.

This particular type even made the BBC!

What the heck does it mean?  Was it the badge of some particular noble?  Or like grylloi is it a humorous, apotropaic emblem? Or a philosophic meditation on the theme of man and beast?  Or all these things?  or something else entirely?

OR! the penny drops!  Is it a visual pun?!  Signia in Latin is also the plural form of the neuter noun meaning: standard, seal, sign, signal, proof, indication from the verb signo to mark, stamp, designate, sign, seal.  The type chosen is a very very common seal type.  [This is why I blog by the way. It took writing the whole damn post for that penny to drop and me to make the obvious connection.]  This is a really exciting idea to me.  Name puns are all over Roman Republican coinage to show its early early adoption is Latium is especially good. I think it provides a missing link of sorts between the ideas I explored in this earlier post discussing Republican habits, the Abdera series, and Timeaus.  [I’ve talked about puns a lot on this blog, but that post is the best of the lot I think.]

For follow-up later: Henig has some clever things to say about gems usually.  There are two possibly related gems (CG72 and CG 354)  in the Fitzwilliam that he’s written up in his 1994 catalogue.  Must get those pages from ILL…  Strangely none returned in BM, Met, or Boston MFA searches all of which have robust gem collections.

As an aside, I find it funny that Mercury on the obverse is wearing a necklace or similar band.  At first I thought at first it might be an unfortunate die break, but it shows up on a different die as well, but not all of the dies.  Also what the heck does Mercury have to do with dolphins?  Could it have anything to do with bizarre composite deity on the coins of Bursio who has wings and a trident (RRC 352/1)?  I doubt it.  But finding any representation Hermes or Mercury with any nautical attributes is tricky.

Another example of this gem type from Gori:

cf. also this other Gori plate.

So I was skimming the ANS catalogue trying to collect my thoughts about the Italian context for early Roman coinage.  Most of the examples of cast coinage from non-Roman mints seems comfortably familiar. Wheels, Tridents, Anchors, Clubs are all motifs found at Rome and elsewhere.  I particularly like the animals, roosters and sleeping dogs especially.  But then I came across this specimen above: “Female Head in Murex Shell”.  So different!  Even if the other side, a Pegasus, is by contrast strikingly familiar in a numismatic context.  Anyway the unexpected-thing-in-a-shell motif reminded me of course of our discussion of gem stone themes, earlier.  It certainly fits that motif well.

The British Museum also have a good selection of this type of gem.  Note especially the Mule coming out of the murex shell.

Postscript 5 March 2014.  There is no image of that mule coming out of a shell on the BM site, but I just wonder if it isn’t more likely to be an ass.  The ass is known for its generous male genital endowment and Henig argues that the shell is a symbol of a female sexual organs.   You see why I wonder about it being a mule… Anyway, in furhter support of Henig’s fertility theory of the shell motif, there is the other BM specimen (illustrated) where two rabbits issue forth from the shell. 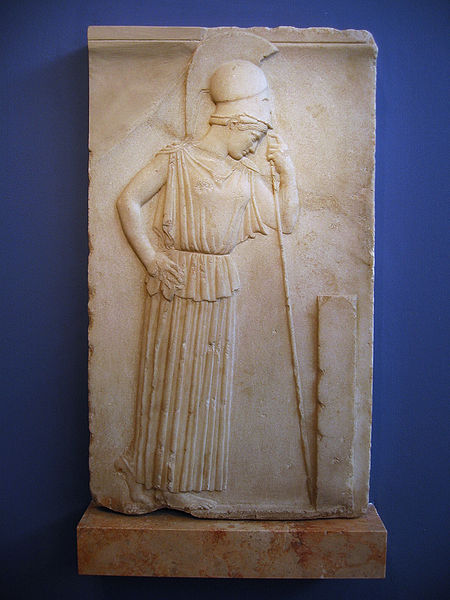 One difference (besides the birds) between the Vespasian restoration and the Republican original discussed the other day  is certainly the posture of the goddess Roma herself.  On the imperial aurei she sits erect with a shorter scepter.  On the republican denarii she leans forward and the spear extends far over her shoulder.   She lets it take her weight.  Her arm which holds it rests on her thigh.  Her gaze is seems full occupied by scene before her.   She is at rest, almost a mournful pose, certainly a contemplative one.  In that, it strongly reminds me of the above Greek relief from Athens in the Acropolis Museum.

The gem, an imprint of which can be seen here: http://arachne.uni-koeln.de/item/marbilder/2688807, does not have the same contemplative pose.  Like on the aurei she sits upright holding her scepter instead of letting it hold her.   The birds are intermittent.  [A. Furtwängler, Beschreibung der geschnittenen Steine im Antiquarium, Königliche Museen Berlin (1896) Cat. no. 9561.]

There is also this gem [http://arachne.uni-koeln.de/item/marbilder/2688808] with Roma and wolf and twins plus tree and Victory, over all a very different composition.

This ‘restoration’ issue of Vespasian takes its inspiration from this republican type (RRC 287/1):

The birds seem to have changed.  Crawford calls the ones on the prototype ‘non-descript’ but the birds on the Vespasian aureus seem to be pretty certainly eagles.  Did the republican engraver just do a bad job of representing the species or has the Imperial engraver ‘improved’ the type for symbolic reasons.  The republican specimens can have some pretty misshapen birds on them:

The literary sources only have woodpeckers associated with the wolf and twins narrative (Ovid, Fasti 3.37 and 54).  One type of woodpecker with a crest was known as Mar’s Woodpecker hence the connection (Pliny NH 11.44).  But that doesn’t mean other birds aren’t found in art.  More than I want to list here. But just as a taster.  Here’s an eagle on a glass paste to which we might compare the Ostian Altar:

And another glass paste with a ‘non-descript’ bird on a grape vine (NOT the ficus Ruminalis then):

This last is a pretty common type of image.  Sometimes the grape vine has a bird, sometimes not.

Then there are the other republican coins (RRC 39/3 and 235/1) and that mirror we discussed ages ago that should be brought into the discussion but I’ll leave it there for now.  Except for just wondering if this weird BM gem with a mysterious head in the scene might not be Roma’s head, like a reverse scaling of the Roma plus wolf-and-twins motif above:

Of course, I had this on file the whole time but didn’t remember the relevance until today….